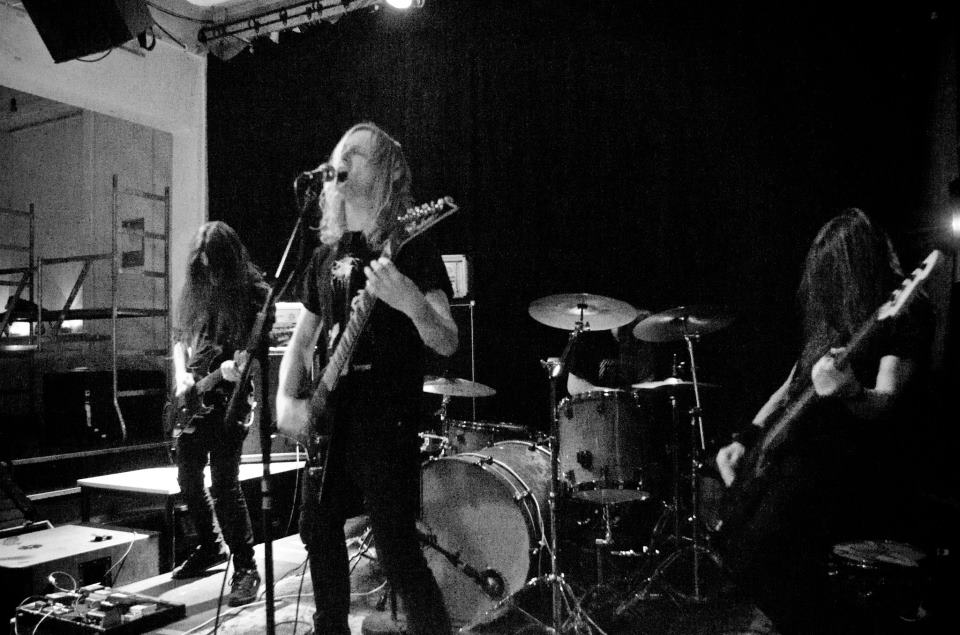 Hello! Please tell the history of SOLBRUD. What does this name mean?
We initially chose the name SOLBRUD among a lot of other names. The beauty of the word in Danish, is that it does not necessarily have just one meaning. In direct translation the name is put together from the word “Sol” which means “sun” and the word “brud”, which has several meanings in Danish. Some of them are burst, fracture, break, bride or violation. So we like the idea that it is up to the listeners to make their own point of view on the name.

The second album is now done, could you tell us some attractions. How long time it took for you to compose and actually record the new material?
We usually take quite a while in the songwriting process before we are satisfied with a song, and our material also grows by being rehearsed over time and performed live, so some of the songs on ‘Jærtegn’ were in fact already written and pretty much done back when we released the first album in 2012. The recording process this time around also took a lot longer than we had expected, because we had a number of issues delaying us along the way, and the studio we were doing it in was quite busy. We also didn’t have a timeframe set from the beginning, because we just wanted to take the time needed for things to be spot on. 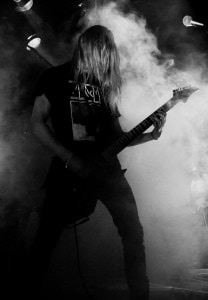 But we first started out tracking drum and bass tracks in June 2013, and then initial rhythm guitar tracks the following month. Vocals, guitar overdubs and other details took more time to get just right, and on top of that we were very perfectionist in the mix and mastering phase. Lasse, the producer, took his time with things and had the correct amount of patience, so we think the final result has turned out very well.

Music of SOLBRUD is really hard, but also full of fragile elements. What kind of mood do you want to impart upon the listener? How can we define the kind of music that you play?
We define the music as black metal because surely the core of the sound has a lot of blast beats, tremolo picking and dark atmosphere in general, but there’s is also more to it than merely labeling the music as black metal. You know, black metal can point in many different directions and is possibly one of the most diverse metal subgenres… Basically we also incorporate other elements which are harder to classify in the music here and there where we see fit. The vibe and essence we are going for in the music is sort of a dystopic mood, with desperate emotions, and overall the sound could be described as a musical reflection of the massive and uncontrollable powers of nature and the world.

How are most incoming reactions at this moment?
We have really received quite a lot of positive response for ‘Jærtegn’. Some people are hitting the roof about it and are writing to give us lots of praise, while much of the mainstream Danish press and some foreign metal media have really revered it in their reviews, and on top of that we’ve even just entered the official Danish album chart as #22 for the first week… That in particular is a little bit weird somehow. Like mentioned before, we are happy with the result of the album ourselves, but at the same time we are a little surprised that the reviews and response to the album have been this good, and that it also appears to have surfaced above the underground scene at this time. One of the biggest national newspapers there is in Denmark featured it as album of week and then even had a little video feature on it. And let’s just say it’s obviously not every week they have a column on black metal albums with 15-minute songs. So all in all we’re just really glad to finally have the album out and receive the praise, and are now looking forward to hitting the road and presenting it live, and also working on new stuff.

Could you explain us the lyrical form of “Jærtegn”?
The essence of the lyrical universe revolves around topics such as the human decay and their penchant for gold and riches. We live in a world where a great deal of modern people seem to have lost the connection to the “real world”, only to be blinded by the sparkling fake world that the television for instance provides us with. These are some interpretations that can be read into the lyrics. The form and aesthetic on the other hand is held in a medieval optic and old Danish expressions are used, thus giving the perspective that in many ways the whole wide human race in general is just as degenerated as we were in the dark ages, if not more far out.

What do you think about evolution of black metal?
It’s not something that we think about all that much. We dig oldschool stuff and newer acts likewise. The styles of music always change, but if you already have found out what certain style of black metal you like the most, you will go after that certain sound the most. We do ourselves, and in that way, we may not always be aware of all the other bands around that are moving in different directions. But of course it’s a good thing that styles change over time. There will always be bands who stay true to the origin of the genre and play a very orthodox black metal and that is really great too. But it’s also great to hear bands experimenting with soundscapes and new expressions, pushing the boundaries, you know, wasn’t that the way black metal came to be in the first place? 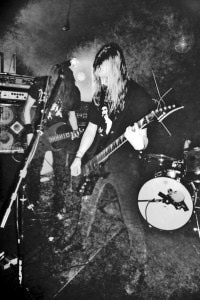 Do you like old traditional image (corpse paint, satanic symbols etc.)?
Yes we do. Even though we don’t do it ourselves, It can be a great way to create a certain mood and amplify the dark expression of the music for some bands. But it has to be complete in order to really work. We have checked out bands through time where it really plays and contributes to the musical theme, but we have also seen a couple of bands where it doesn’t really contribute to the music, and can maybe in some cases be a bit tedious. So there seems to be a fine line in our opinion whether it works for people or not.

You are signed under the Mighty Music Music label. How did you get signed? It is a very reputable label. Is it similar in Denmark?
We have our former label guy Peter to thank for this. It was he who got us signed on Euphonious Records/VME (now DME) with our first album, and when he got a new job and moved over to Target, he brought us with him. In Denmark, Target Group is one of the bigger independent record companies and Mighty Music is probably the largest and oldest still running metal label around here.

How are you satisfied with label ́s work till now?
Well it’s hard to say how much attention we would have gotten without that label in our back, in comparison to a different one. I suppose we’re taking as much a chance with them as they are with us, but they’re one of the longest running metal labels here in Denmark, so we’re pretty sure they’ve got their shit together. We’ve gotten a fair and square deal with them for just this album, and things have been running quite smooth so far, and the promotion appears to have gone well, so yeah, no complaints.
What are your opinions on the current Black Metal scene? Maybe not actual theme, but….There are a lot of great bands out there doing all they can to make great music. Also in Denmark we can see something is happening with the scene these years, and a fresh array of new and diverse acts have blossomed up alongside ourselves. We know a great deal of cool people in Copenhagen who play many different kinds of awesome guitar-fueled music. Same thing if you look outside Denmark. Thanks to bandcamp, soundcloud and youtube, you have the possibility to listen to underground black metal music from all over the world. That’s just fucking awesome! 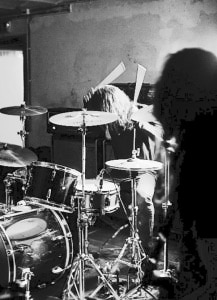 What are your thoughts on those who feel that there is no place for keyboards in black metal?
In short, there shouldn’t be any rules or rights or wrongs in music if you ask us. Sure, there may be examples where the keyboards aren’t all that great or a bit over the top, but so what? There are also bands where the keyboards sound really sinister and add unique atmosphere that couldn’t be achieved without them. it’s a matter of taste and one shouldn’t be fascist about that.

What bands are you currently listening to right now?
Ahh, where to begin … Stuff like MORTIFERA, LEVIATHAN, ELYSIAN BLAZE, DRUDKH… Just to name a few. The list goes on and like we said you’re just a few clicks away from discovering new stuff in the same vein via e.g. bandcamp. Each of us have our favorites and different preferences within the specter of black metal. Over the course of editing this interview, slightly hung over, I have had RAINBOW’S Long live rock’n’roll album, some newly browsed kraut stuff and good old MAYHEM – De Mysteriis Dom Sathanas running on youtube.

Are you listening to lots of genres of music?
Yeah we sure do. And this can also be a good way to be inspired beyond black metal. Among a lot of genres, some of the ones we have in common are 70’s blues rock, folk, jazz, classical and old Danish hippie music.

What are the plans for SOLBRUD’s near future?
For now we are having a handful of good local gigs setup here in the winter to keep the steel hot when the album is out. The majority of our audience is in Copenhagen, but people here will also have had the opportunity to hear us quite a few times by now, so we’re making efforts to get some small tours set up in the neighboring European countries next year, and are in contact with a couple of bookers at this moment. A part from that we’re really just going with where the stuff takes us next. Which is already much further than we would have thought of initially.

What do you think about the European Union? How do you see the future of the big organization?
Hmm, that doesn’t really have all that much to do with our band and music… But it’s safe to say that we personally don’t have the greatest enthusiasm for politicians and their systems in general.

Thanks a lot for you time! the last words are yours …
Thanks Alles for hitting us up for this interview feature, and to anyone out there reading the whole thing to the end, cheers and keep it fuckin’ metal;)