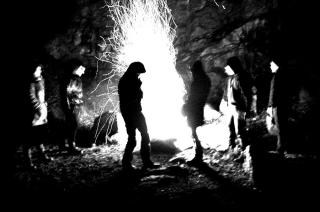 Hello! How are you today? Can you tell me something about news in HIIDENHAUTA band?
Hello, today; mainly pain and agony. Otherwise okay. Our new album will be released 14.3, so that is just great. And we‘ll also start making a music video of the song „Hiiden virsi“.

Which were your motivations to become musicians? What music type did you listen to then?
Music is the way to express ourselves, definitely. It tells our deepest emotions. By myself I can say that music has been a big part of me so long and it is with writing one of the biggest things in my life. All walks hand in hand; poetry, music, beliefs, life, nature and all.

Are you setting up some recording policy? For example that every song must have some particular variety, one or more interesting moments?
Our studio sessions is always one hell of a mess in cold, darkness and with some strange incidents. We don’t have anything certain way to do, but everything still stays together and none of us is, at least, not dead yet. I don‘t like to see anyone, so my part is to be alone in the dark and do what must be done, and that’s it.

Although I have mostly abstracted mood during listening „Noitia on Minun Sukuni““, I never can describe, what I feel. What kind of emotions goes through me… Is there any compact theme behind the album? Or themes?
I hope and think it brings many different themes and feelings to the listener. But it’s not a concept album, like our EP „Eikä aurinko valaise“ is.
I feel „Noitia on minun sukuni“ is very deep and dark. Overall it tells a story about nature, darkness, history, anti-Christianity and Finnish-Baltic mythology. 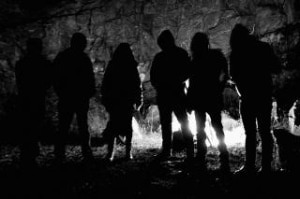 Your music doesn’t feel depressive. Which spirit should prevail on your new album? Did you have any idea, what the listener should feel, listening to it?
Maybe it’s more depressive in lyrical ways, but musically it’s more sad and close to nature than just depressive or suicidal. Everyone feels it their own ways and I don’t open lyrics or music in any way. Musical experience is always personal and „Noitia on minun sukuni“ doesen’t have just one feel.

Has anything changed according to your writing process or recording from the beginning of HIIDENHAUTA?
Actually no. We have always been our own style to do things and it has worked.

Do you have any information how your fans received the new CD ?
Not really. We have given some copies already to some, but no, not yet. We know it is expected and we have received very passionate messages about our new album, so couple of weeks and then we know more.

Album cover is really interesting! Although it seems strictly horror-like, more than “spooky feeling” it gives sense of loneliness. head of an animal, snow…. I succesful in guess of the meaning? If not, correct me…
It have lots of meanings from loneliness to hate. We want it to be threatening and brings many feelings and interpretations. By the way at the time the picture was taken was quite cold as fuck and we were walking in the forest for several hours with that head. Now it rots in peace and waits for the spring to come. 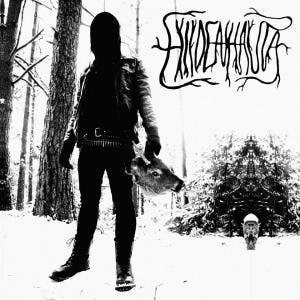 How much attention do you pay to reactions of your fans, your colleagues and people around you to your music? Do you consider this kind of feedback when working on your new material?
Of course we take it in, but no, it doesn’t mean much. We have our path to walk and music is so much more to us than just „music which is to entertain people“. We make music to our own starting point and always give part of ourselves to it. It’s the way to breathe. But I’m not talking anyone elses mouth, but by myself it’s that.

How you would define your music to innocent listener…? I ask you purposely, because variety of songs – influences in them is big…
That’s hard and it is not completely defined. It must be felt and breathed, like it’s the last thing you do. It’s close to nature, maybe wrathful with some sorrow. And when you find that thread, then you can understand the entirety and notice there is not so big variety of songs.

What is your opinion about the “classic” black metal image? There are still less bands, that use corpse paint and wear spikes and such stuff. Do you think that this is really necessary part of the real black metal show? What is your opinion about this?
In a way it is necessary to, but it still can be taken a step further without that. In principle I don’t like any kind of shows and I don’t want to be part of any kind of fucking „musical family“. I hate everyone already. But corpse paint is characteristic part of black metal then and now and if it’s to make an atmosphere stronger, then it’s necessary.

There are many bands which are doing black metal in their own way. In way, which is miles away from the original idea of black metal. What´s your opinion about the „new wave of black metal“? Do you feel like being a part of this new wave in some way? 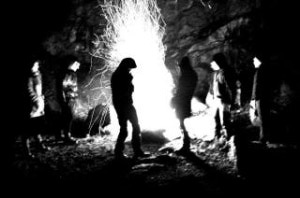 We don’t be part of anything, at least not any kind of cool and nice new wave shit which is, as you say, miles away from the original idea of black metal. What it really is? Maybe to us it is our way to suffer. Of course genre will progress, but the idea of darkness, anti-Christianity, and even though misery still not have to be removed.

How is your music accepted in your country? Does Finland favour “progressive” bands or traditional types of metal?
In Finland we have lots of differnet kind of metal. Here some of them are also even mainstream. But for most of people metal is that „from grandma to daughter style pop metal“ and they can’t understand black metal at all. Well and good. They who can take it in, understands what it can give.

What are you listening to nowadays ? Have you any types for czech’s readers?
There are so many different bands that we all listen and I’m not going to say any of them. But black metal, classical and silence.

Well, I´m close to end. I would like to say that I really appreciate your friendly attitude and willingness. Good luck in your personal and musical life. Last words are yours of course.
Remain in darkness, there is secure.