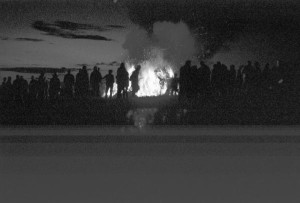 Founded originally in Svalbard, Norway in 2001, the Blackmetal band ZNAFELRIFF soon began writing songs about Satanism, Fear, Nature, Darkness and Decay. The band recorded a demo with 6 songs in 2002 titled “Skruvmejseln Utsiktstornet”. Two years later the band took a break from the creative process and some members moved to Berlin, Germany. The following years they recorded several song with varying styles and topics. In 2012 the best 5 of these songs where released together as the EP “The Desolate Years”.

2014 the band gathered again in Svalbard and recorded their newest output “RUIN” – again as an EP with 5 songs. “RUIN” will be released via Bandcamp on the 1 st of January 2015. This time the lyrics are not Norwegian or English like in the past, all songs are in German and cover the dark side of nature and the human race. The style now is a mix between Blackmetal and Darkmetal, so the band calls it Anthracite Metal.