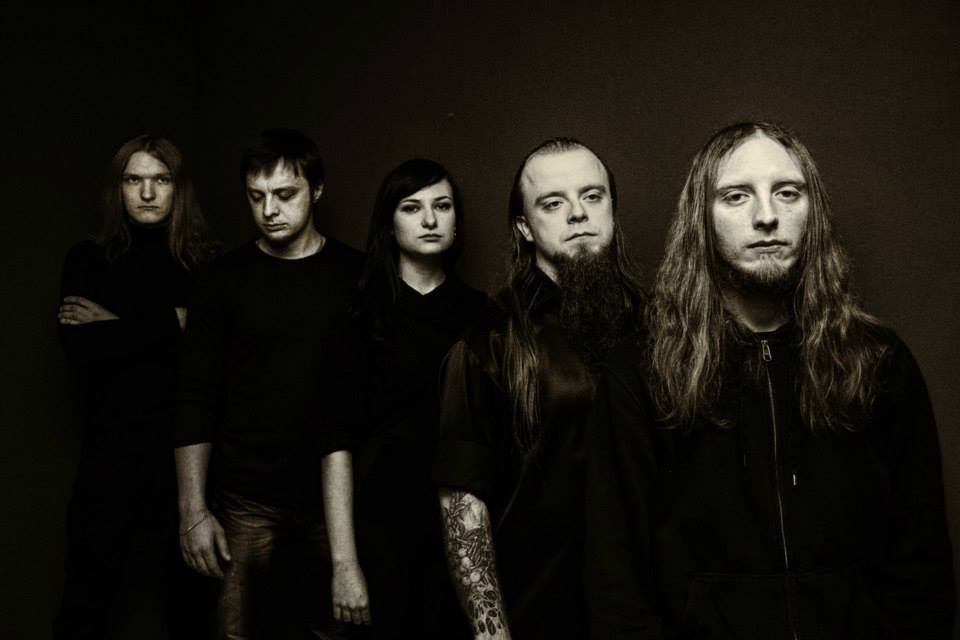 Greetings. Since WOE UNTO ME are still rather unknown in metal scene this question cannot be avoided. Could you please briefly present the band to the readers?
Well, we’re from Grodno, Belarus and we perform doom metal in it’s broad sense, it means that there are elements of funeral doom, death doom and other sub genres in our music, but still saying in short it’s a real doom. Our band was formed in 2008 by two guitarists Dzmitry and Artyom (me), then several years have past dedicated to the composing the material and completing the full line-up. In 2011-2012 we’ve been thoroughly engaged in the process of recording our debut album, and in 2013 we’ve signed a deal with cult doom metal label from Russia – Solitude Productions. So, thanks to that on 27 January 2014 our CD was finally released. And we’ve immediately started our concert activity and have already done our first tour in support of our album with our friends, latvian doom-death metal band Frailty.

The biggest step you took is probably the decision to play funeral doom metal. When and how did you decide this?
We picked that style of music in the very beginning. Though we all listen to different genres we really wanted to create something very dark, gloomy, slow, melodic and atmospheric. Funeral doom is a quintessence of these epithets, and is a quite rare style and we almost immediately decided that this is what we need. It doesn’t mean of course that we limit ourselves. We like to experiment, so be sure that funeral doom is not the only thing that you are going to hear in our music.

Can you tell me something about debut CD “A Step into the Waters of Forgetfulness”? Our music is a full of pain, sadness… Is it mirror of your lives?
Yes, deffinitely it is a mirror of our lives. This music, lyrics, the whole album is very personal probably to each of us. It’s really full of despair, inner pain, sadness and hopelessness, full of depressive emotions and loneliness. There are a lot of tears in this album, tears which can not be weep out, which usually a man doesn’t let out of his eyes.

Now that the album is finished are you completely satisfied or would you change something if you could?
I think that it’s a normal thing for the musician to have the desire to change something. The satisfaction itself stays of course and we are very happy about how the album sounds, but anyway some time after you have recorded something or even released, the ideas keep on coming into your mind and you think that maybe it could be better to add this or that to the sound or to the musical score. Sometimes this process can be unstopable, so it’s better to release the album as soon as you can, or you will become the slave of eternal new ideas and this desire to make it better and better can lead you the wrong way and you can spoil the original atmosphere by adding too much, so you should always know when to stop. (heheheh) We have some little changes and new things in the guitars and vocals which we added in our live performances and which are not present on the album. I think these small surprises will make the live shows a little bit more attractive.

Could you please also tell us something about the lyrics of the new album? Are they anyhow connected, is there some kind of concept behind them?
Despite the independence of each track, this album should be called as the conceptual. It is the story of one character and every song is a certain stage in his life, his feelings, a stage of understanding of the absence of the meaning of life and its unbearableness with periodic hopes of “healing” and another disappointments, until the complete collapse, loss of himself as individuality and understanding of the impossibility of further existence. This story is perhaps the story of a real person, but it is deliberately abstracted from the particular individual, so that everyone could see what he/she wants to see, feel what he/she wants to feel, find the parallels corresponding to his/her mood and feelings. 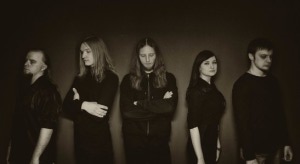 Music you make itself is quite unique and attracts, but anyway you were inspired by somebody, so I would like to know by who?
If we’re talking about the doom metal scene then it would be silly to deny that a lot of bands give us inspiration and probably the names of these bands will be different if you will ask every member of Woe Unto Me. I will name couple of bands which inspire me personally: SHAPE OF DESPAIR, MY DYING BRIDE, SATURNUS, ULVER, KATATONIA, BLINDEAD, DOOM:VS, SWALLOW THE SUN, PARADISE LOST, ANATHEMA.

I am interested in your view of the world funeral doom scene. How is it currently doing?
That’s very interesting question. We’ve noticed that in funeral doom scene some kind of a tendency appeared recently. It reminds me of a cliche which is mostly typical for black metal scene. People started to use a concept of what is „true“ and „not true“. And I think that such way of thinking locks this style inside certain borders or frames. Many bands that use funeral doom as a basis of their music and start to experiment or bring in some unusual elements are immediately called „untrue“ and are not concerned to be funeral doom bands anymore. Or for example some people think that the use of clean vocals makes the music „less funeral“. That seems to me really strange and narrow-minded. In our band we think that funeral doom metal is far more broader genre than some people perceive it. So let’s not limit ourselves and our musical tastes, let’s enjoy the music itself and the atmosphere and not waste the time trying to determine whether it is within the style or outside of it.

What about your own musical taste? Which bands or genres do you enjoy most?
I listen to a huge range of different musical styles. I’m a real music fan, so I can find a lot of interesting for me in anything connected with it, starting with classical music and finishing even with pop music. Still of course mostly I’m fond of metal. Probably one of the most favourite genres is death metal, especially progressive and technical death metal. Some of my favourite bands are: Death, Morbid Angel, Meshuggah, Gojira, Gorguts, Cynic, Opeth, etc. I also like black metal in the vein of Mayhem or Emperor. And of course progressive metal like PAIN OF SALVATION, ARK, DEVIN TOWNSEND, IHSAHN, FATES WARNING, TOOL, NEVERMORE, etc. 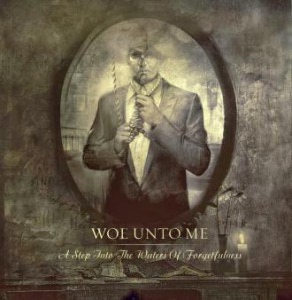 So let me ask you, what is Grodno like? Could you introduce this town to the Czechs?
Grodno is a very nice, beautiful city, it’s really worth visiting. Grodno pretty much differs from other cities in Belarus, I mean foremost architecturally. There are no Soviet-style buildings in such amount as they are in Eastern part of Belarus. The center of the city is very cosy and attractive, a lot of cobbled alleyways and sights of interest. I believe that Grodno is a kind of city that after visiting it once, you would deffinitely like to visit it again. So, with a great pleasure we would like to invite you, guys, to our city.

Tell me what’s the life in Belarus? Is it hard or not? Have you been gigging much outside of Belarus?
It’s not very easy indeed. It’s too difficult to describe all the aspects, probably it could take a lot of time and you would have to dedicate the whole magazine to that topic revealing the economic, political, cultural nuances. If we are speaking about the music and the concerts, it’s not very easy to organize a concert in our country, I mean to organize a concert of some local bands or even bands from other countries (we’re not talking about really huge headliners right now) and compensate all expenses and get profit of it, it’s practically impossible. Everything is done thanks to the enthusiasm of not big group of people. There are many bureaucratic obstacles, sometimes censorship also influences a lot. Let’s not forget about visa policy too. What concerns gigging outside Belarus… In case of WOE UNTO ME, we’ve just finished our first tour and it included also concerts outside our country. We were performing in Lithuania, Latvia, Estonia and Russia. It was a very good tour and unforgetable experience, great fans, we were very well received and we’re not going to stop and are planning to visit other parts of Europe in the nearest future.

Please, tell me about other bands from your country?
There are quite a lot of interesting and talented bands in Belarus, but unfortunately, as I’ve mentioned before, due to the fact that musical infrastructure is not well developed in our country, due to isolation policy in a way, most of the bands exist only within their own country or CIS countries and do not have the financial and not only financial possibilities to lead their concert activity outside this terrritory. Some of the labels are simply not interested in such bands, because there are too many difficulties with touring outside the country and promoting the material abroad with live performances. And as there are no further incentives most of the bands split up after a couple of years of existence. Still, there are some bands which continue to go through all the difficulties with their strong enthusiastic approach. Here are some names in different metal genres that are worth to check: SERDCE, POSTHUMOUS BLASPHEMER, REIDO, NIGHTSIDE GLANCE, INFESTUM, GODS TOWER, VEIN OF HATE, and check out belarussian bands, that I’m involved in of course: Deathbringer and Amentia. :))

What do you think about political situation on Ukraine? Is it big theme also Belarus people?
You know, our music has nothing in common with the politics, but of course we as normal people are very worried about the situation in Ukraine. We have a lot of friends there, some of us have relatives and this is our neighbor country, so none of us can stay indifferent. People in Belarus have different points of view, some of them are on the side of Russia, some on the side of Western Ukraine, but the most important thing is that we are all against the war, against splitting the Ukrainian people, Ukrainian nation. The whole situation is really difficult and we worry that this conflict seems to be too complicated to solve it in the most peaceful way, but we still hope for the best, we hope that people will not get harmed and will not suffer and Ukraine will manage to overcome one of the most hard periods in its life.

Ok, final questions….Do you know some czech metal bands?
Yes, I know several names. I know that you have a very strong grind core scene, though I’m not a big fan of it, but I remember such bands as: AHUMADO GRANUJO, CEREBRAL TURBULENCY, ALIENATION MENTAL, JIG-Ai. Of course I know legendary KRABATHOR and HYPNOS, and also progressive death metal bands PESSIMIST and DRACO HYPNALIS.

So are there any closing comments you would like to make to our readers?
Probably as always we would like to ask you guys to support the underground scene, to keep going to concerts and buying the original CDs. After all the metal scene and underground scene is still alive thanks to you – the real fans, thanks to your support, your interest, your perseverance and your devotion. Stay doomed, stay blackened, stay brutal, whatever you like, just keep supporting metal.

Good, good luck!!! All The Best, see you!
Thank you very much for this interview! Good luck to you too!!! Best regards!!!