Hello Artyom,welcome! How are you just now?
Hey mate! I’m ok, more or less, like every other musician, trying to survive during these crazy times. The music industry is one of the most affected by all these lockdowns and restrictions. So we all are waiting when it will end and we’ll get back to our normal lives.

Bro, can you introduce your new EP “Spiral-Shaped Hopewreck”? Is it a conceptual record?
Our new EP was released on March 12th 2021 via BadMoodMan Music, a division of Solitude Productions. There is a tricky thing about the “Spiral-Shaped Hopewreck”. It’s not a conceptual record by itself but it has several hints about the concept of the forthcoming full-length album. All the names of the tracks in the EP are building a coherent sentence which indicates a part of the concept of the next release that we are preparing for the nearest future. On the inside artwork of the digipak of “Spiral-Shaped Hopewreck” you can find the word “morph”, that’s another kind of hint. And the artwork itself is also a part of the whole concept. When the album will come out listeners will understand the whole idea, but for now it’s a kind of a small riddle.

Music of your new EP is about “progressive- rock – funeral”. Is it actual evolution of WOE UNTO ME? But what about next full-length album? Will it be something totally different…?
WOE UNTO ME is definitely evolving with each release. And this EP is another evolutionary step for us. But you shouldn’t be totally deceived by the musical content of this record. There’s only one song composed by us in it. It’s eponymous track “Spiral-Shaped Hopewreck”. The rest are two covers: „Sad and Slow“ of the french prog band KLONE, and „Lethargica“ of the mighty MESHUGGAH. And of course 4 instrumental interludes between these tracks which are connecting everything into a full-fledged musical canvas. For sure our next album will contain some of the elements that you can hear in this EP, obviously because the song „Spiral-Shaped Hopewreck“ will be a part of it, but in the rest of the compositions you will find many interesting things, some of them are closer to what we played on our previous records, some of them are stylistically completely new. You will find various flavors there: some prog metal, some funeral doom and death doom of course, a bit of ambient and something that somebody can call dark metal or something like that. The new album is going to be definitely very atmospheric, melodic but at the same time dark too, as I’ve mentioned it’s very diverse and I’m sure this album will appeal not only to doom metal fans.

What evolution as a musician and a band do you see across your studio records?
I feel that we are constantly developing and progressing. It happens very naturally, we are just guided by our creative thoughts and ideas; and we are not limiting ourselves by any specific genres. We like to experiment. And I think we really evolved a lot as musicians during the existence of WOE UNTO ME. Personally I like all our albums, each one in its own way. “A Step into The Waters Of Forgetfulness” was more about the funeral doom, it’s a pretty much straightforward record but it’s very atmospheric. Then we started to embed a lot of unusual instruments, sounds and effects, techniques to make our music more diverse and unpredictable. And as a result “Among The Lightened Skies The Voidness Flashed” is a very experimental album. The basis of the first CD is death-doom metal with funeral elements, but it has some prog, ambient and as some people say even jazzy dressings in it. The second CD was a very unusual experiment for us, cause it’s a completely different face of WOE UNTO ME, it’s more of a prog rock/art rock. And now we continue developing, becoming more and more mature but keeping all these elements we went through in our music and introducing some new components.

Please, can you introduce your new singer? Do you think line-up changes in a band are necessary? Do changes bring a new vibe, help to prevent you from falling into routine or are they rather a natural thing?
Our new singer’s name is Igor Kovalyov. He is also a vocalist and drummer in his own band NEBULAE COME SWEET, great band by the way, be sure to check them out. He’s an awesome guy, both in terms of personality and music-wise. He is a very talented musician, a great vocalist and I feel that we are very close in spirit. So I hope this time it’s the right person for our band and he will stay for much longer than our previous singers. He is full of ideas and wants to contribute a lot which I of course fully support. He wrote all the lyrics for our forthcoming album, helps a lot with arrangements. I am very pleased with this collaboration and glad to have such person on board.

This line-up change for sure brought a new vibe to the band, but in WOE UNTO ME such changes are just a natural thing. Indeed, someone may get the impression that we have formed a kind of tradition, to change a vocalist for every new album. But it’s not true. We never had such plans, we always wanted to have a permanent line-up. It was happening naturally and I believe that previous singers were just not meant for our band. That’s why I hope that this time we’ve found the right person.

Melancholy is prominently present on all the records. Is it important symbol of WOE UNTO ME?
I never thought of it like that, but probably it’s true, melancholy is always somewhere around. It’s in our music, in our lyrics. You can probably say that it’s an integral part of WOE UNTO ME style.

Fans always tend to idealize the metal scene. Do you agree with this? Are you satisfied with position of WOE UNTO ME in Europe?
I don’t think that it’s a good quality in the musician or simply creative person to be completely satisfied with the position you are in. I think we should always develop and always strive to make a step forward, wanting more than we are having right now. It seems to me that it’s a natural thing for every band, a desire to become bigger, to have a wider audience, to perform at bigger shows and festivals. I definitely want more and more people to listen to what I’m creating. But I’m not talking of course about becoming a pop or hip-hop artist, you know what I mean. I mean the growth of the band within the music they have chosen for themselves. Concerning idealization of anything. I’m far from that. I don’t like to idealize. Though I do think that metal music is a more intellectual and interesting than most of the pop culture nowadays.

Do you listen to new music lately? Has any of that provided any inspiration for the future direction of WOE UNTO ME? What’s currently rotating in your CD player?
Sure, I do listen to new music, but I wish I could listen to it more and discover even more new and interesting stuff. I’m not sure that new music can define the future direction of WOE UNTO ME. It certainly inspires me as a musician to compose something but it doesn’t mean that what I will create will sound like the music that inspired me. It’s like even a good pop song can inspire a death metal band to compose a new death metal masterpiece and maybe vice versa, hahah.

So what’s currently in my CD player: KLONE with their album “Le Grand Voyage“, WHEEL with the fresh release “Resident Human“, KATATONIA “City Burials“ – the best album of 2020 for me, new songs of CANNIBAL CORPSE I’m really looking forward to their forthcoming “Violence Unimagined“, CATTLE DECAPITATION – “Death Atlas“, new ENSLAVED – “Utgard“, PAIN OF SALVATION – both last albums „In The Passing Light Of Day“ and „Panther“, last two releases of SWALLOW THE SUN – “Lumina Aurea“ and “When A Shadow Is Forced Into The Light“, THE OCEAN COLLECTIVE both “Phanerozoic I and II“,  ULCERATE – “Stare Into Death And Be Still“. I also listen to a lot of ULVER, PINK FLOYD, DEATH, PARADISE LOST, MORBID ANGEL, WARDRUNA and many more. 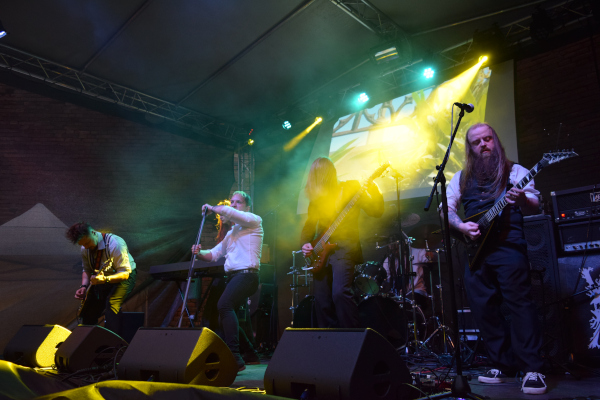 Please, can you tell me something about situation in Belarus? How do the events in Belarus affecting your band? Do you believe in happy end?
The situation in our country is still very strained and stressful. Basically this is a police state right now. Complete lack of rights. State security forces are doing whatever the tyrannical orders are. People who are suspected of taking part in the protests or showing their attitude by wearing or just having symbols of the opposition like white-red-white flag for example or even simply wearing clothes of certain colors (white with red) are being arrested, kidnapped from their homes by police, imprisoned or penalized. Some of my friends were beaten and hospitalized or were imprisoned for peaceful protests against the authorities who, as you know, falsified the results of the elections to continue the dictator’s reign which lasts almost 27 years already. People are suffering for their will to freedom. Protests slowed down a bit at the present moment and went into a more political channel and attempts to urge the authorities to begin a dialogue, but the governmental terror machine is still running, continuing real repressions.

Speaking about the band itself, such things like: closed borders, problems with getting a visa, etc., are of course affecting our activity. Government is trying to lock everybody within the country so that it would be harder for people to leave it. Kind of another “iron curtain”. Now officially we are allowed to cross the border only once in half a year by land and only if you have a working visa. It doesn’t concern travelling by plane but obviously plane tickets are expensive so not everybody can afford it. So in the nearest future this political crisis can become a significant cause for problems with shows and tours, as nobody knows what to expect with all these borders, vaccinations and so on and so forth. Circumstances are so unpredictable and so many innocent people suffered from this lawlessness that you never know what can happen. I still do believe in a happy end but I’m not sure how long people will have to suffer until the country will reach this happy end and in what economic condition Belarus will be by then.

Is the political situation now an inspiration for you?
I don’t think that this political situation gives me inspiration to create something. In fact this situation is so injust and wrong, so many people suffer from it, that it absolutely negatively affects me, hinders my creativity, causing states of depression and apathy. Though I’m defenitely trying to fight these states and not to give up.

Any special message for your fans in Czech republic? Thank you very much and take care!
We are really looking forward to seeing you again on our shows in Czech Republic, Brno and Jaromer, during the Mourning Over Europe Tour 2021 with CLOUDS, WHO DIES IN SIBERIAN SLUSH and HALTER. This tour was postponed two times already due to the reasons known to everyone. Right now it is scheduled for the beginning of September, Brno on September 9th, Jaromer on September 10th. We really hope that shows will be possible by then. We absolutely love to play in Czech Republic and can’t wait to be back on stage again. Meanwhile you can support us by buying some merch on our Bandcamp and simply write us some comments, your impressions concerning our new EP and any kind of feedback. Thank you so much for the interview bro! Hope to see you soon!