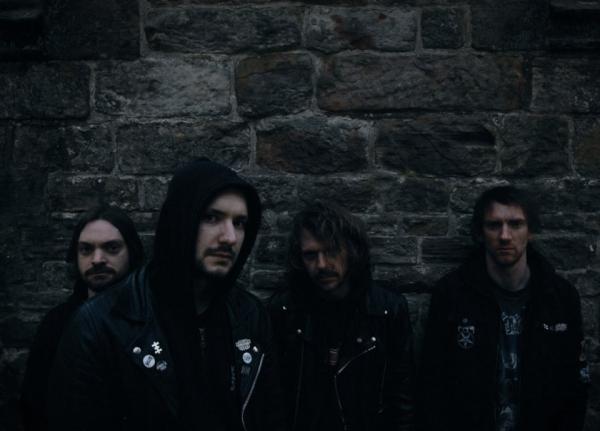 Hello and welcome! I already know of your obviously existence, I’m fan of your debut album ‘Wode’, but… Can you tell me something about start of WODE? What’s your basic motivate point for making music?
WODE began as a two-piece in late 2010, with myself (M.C.) on guitar and vocals and T.H. on drums and vocals. The only motivation we had at the time was to create raw and uncompromising black metal. Gradually the line-up has expanded and the music has become more refined, but the spirit in which we formed the band still remains.

What does black metal music mean to you? Lifestyle, phylosophy or art only?
I see black metal as an art form first and foremost, as a means of expression and way of channelling something ancient and wild. When done right it can be incredibly powerful and cathartic. Although the music itself is always the most important thing, some of black metal’s philosophical leanings such as an interest in the esoteric and a desire for individualism are certainly appealing to us, while other parts of the ideology do not appeal at all. Black metal is certainly a big part of our lives but it isn’t the whole picture and, to me, it is more of a personal feeling rather than something I’d equate to any kind of lifestyle. 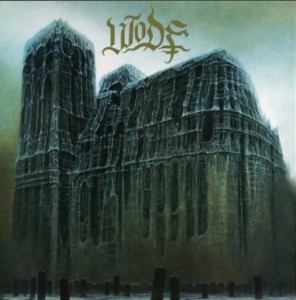 OK, please, next question…’Servants of the Countercosmos’ – Please describe an idea of album (if it is possible)? How did the album title come about and what can people look forward to from this new album?
The title is of our own invention and, in the spirit of the western esoteric tradition, borrows from different sources (religious mysticism, anti-cosmic philosophy, science fiction etc.) in an attempt to create a kind of new reality. Thematically, the album focuses on the unknown, the cosmos as a force for annihilation but also for rebirth, and the idea of existing on the threshold between two worlds – the world of the mind and the world beyond our perception. Musically, it is our most vicious release although there is a lot of melody and variation to be found as well. I’d say the performance, themes, and visual element all work in harmony to create the most realised document of the band to date.

Structures of your tracks are very varied, but extremely and raw. What do you think…? It’s primary symbol of your music face?
We want the music to be dynamic and unpredictable as ultimately we are trying to write music that we would like to listen to ourselves. We’re not black metal purists, so there are plenty of heavy metal, death, thrash and punk influences within the music. The key is to use these influences in a way that feels natural and helps to further the song rather than in a way that feels jarring or random. The rawness is down to our approach when playing – an honest, intense performance is preferable to a technically perfect but sterile one.

Did you do anything different with this record compared to previous releases?
Previous material was always written in isolation by T.H. or myself and then presented to the band, who would then form the arrangement of a song around what had been written already. We took a different approach with the new album by writing much of it together between the four of us, often jamming and coming up with ideas in the moment which were then worked on and edited over time to become the final songs. Leads, solos and lyrics were written separately around song structures. I think this way of working gives the music a lot more fluency and helped us to be more productive, as writing in isolation can often be a lengthy and frustrating process. Our approach to recording was the same as last time, although we felt much more confident in our abilities and in what we wanted to achieve, which gave us the opportunity to experiment in the studio with different sounds (synths, noise, acoustic guitar etc.) 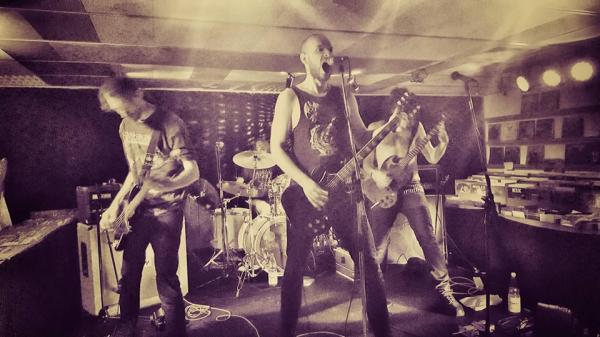 How do you think – is your music changing with years? If yes, in what direction it goes?
I think it has changed quite a lot already. The demo was fairly straightforward and structurally simple, while the first album had much longer songs with some more complex sections. I see ‘Servants…’ as an amalgamation of both; it has the simple, destructive riffing that can be found on the demo, as well as some of the more far-reaching and technical aspects of the first album. We’ve grown more confident in our writing abilities and have also learned how to edit ourselves – the new album does away with some of the unnecessary elements found on the self-titled album and I think it makes the music a lot more immediate. I’m sure the music will continue to change as we bring in new influences and ways of working, but at the present moment I’m not sure which direction it will go. 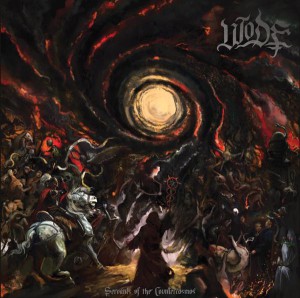 What’s your favorite theme to write songs about?
Lyrics start to form while a song is being written, so the mood of a song will often determine its subject matter, although I prefer the lyrics to have some ambiguity and not to just serve as a narrative. The first album was more introspective and personal, it dealt with themes of natural decay and disorder as an allegory for death and loss. ‘Servants..’ is much more bombastic and all-encompassing so it made sense for the lyrics to focus less on the self and more on the cosmos and the destructive forces found therein.

Influences are always important. Which bands influenced you, be they black metal l or not.
There are plenty of different musical influences between the four of us, but a few that I’d mention would be ABSU, SLAYER, DISSECTION, BATHORY, NECROMANTIA, JUDAS PRIEST, MERCYFUL FATE and BLACK HOLE. While some of the more synth-based intros and interludes on the new album are influenced by groups like Coil for example.

The music industry seems to be in a period of long decline, in terms of sales, financial returns, etc. It’s good message for underground metal society?
Interest in underground metal, particularly black and death, seems to be healthy at the moment and typically this is an audience that will buy music and attend gigs, so I’m not sure sales trends in the mainstream really apply here. In fact, as an underground band, I think the best way to succeed is to be as independent from the music industry as possible. The Internet has certainly helped us with that, as we’ve been able to book European tours without paying a booking agent, negotiate with labels, and sell our music and merchandise ourselves through bandcamp etc.

What’s your opinion of Brexit? Have you got any message for czech people? What should we be doing? A lot people speaks about Czechxit…
I found the whole media circus surrounding the vote to be pretty disgraceful, with both sides employing extremely negative campaigns in order to incite fear in voters. I’m not sure what will happen when we eventually leave the EU, but my inkling is that things will remain mostly the same for ordinary people while the rich will continue to prosper. I don’t know much about the economic and political landscape in the Czech Republic, but the current situation in the UK – where our idiotic and unprepared leaders try desperately to negotiate with a stubborn and unwilling EU, leaving us in a limbo where our currency continues to devalue and trade cannot sustain – is not something I’d recommend to any country.

What are some plans for you guys are you going to be touring?
We’re booked to play Vendetta Fest in Berlin next April and there will be a European tour surrounding that, as well as some sporadic UK dates throughout the year. We also plan to start working on our next release soon which will be a 7” or short EP.