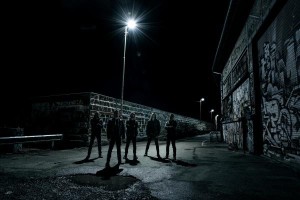 Since their debut in 2010, WHEELFALL has moved on to become one of the most relentless, intense and genre-pushing bands of our generation. Their will to create new sounds and to crush boundaries into cathartic atmospheres definitely comes alive with critically acclaimed double album and novel « Glasrew Point » in 2015, with which it became obvious to all that WHEELFALL has created their own musical universe.

A universe they continue to push one step further with their latest ear-crushing album « The Atrocity Reports » to be released in 2017: a bad dream through disturbing sounds and visions which tirelessly strike your mind, stucked in a thick dark fog. That’s what WHEELFALL is all about. « The Atrocity Reports » is without any doubt the most harmful and vicious album they released until now, at a level you’ll rarely experience in metal.