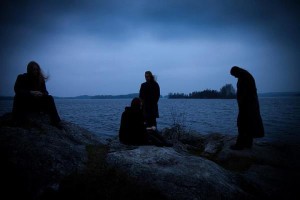 PROFETUS are one of the most respected bands in the style and this is probably their finest album till date. Now that it’s remastered by Dan Lowndes (BLOOD INCANTATION, SIGH, CRUCIAMENTUM), it sounds even more obscure and captivating.

Acclaimed Japanese label Weird Truth Productions brings you a new release of Finnish doom metal masters PROFETUS. Although originally released in 2009, this gem of a release has been remastered by Dan Lowndes of Resonance Sound Studio which is known for its work with bands like BLOOD INCANTATION, SIGH, CRUCIAMENTUM, etc. Expect sonorous, plodding doom from the depths of human misery, wonderfully expressed using sparse notes and a despondent atmosphere. This hearkens back to the glorious era of bands like THERGOTHON, SKEPTICISM, TYRANNY and ESOTERIC, when this kind of funeral doom was arguably at its peak. Along with this magnificent debut, the label has included their first demo and even a live track as bonus. This is the epitome of funeral doom and all that’s special about it.