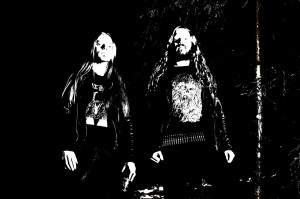 In the autumn of 2015, Jon Embalmer (Wendigo, Cognition) decided to pay tribute to his favourite style of black metal, 90s True Norwegian Black Metal. He asked KVALVAAG (ASTAROTH, ARVAS, WENDIGO) to join on bass, and Kvalvaag agreed on the condition that he could play drums as well. The ideology of Valgaldr is to sound like a 90s Norwegian Black Metal band that could have coexisted naturally alongside the bands of the time.

The debut album, “Østenfor sol”, has been released on CD by Fallen-Angels Productions and has received an excellent reception in the underground black metal scene. Now Heathen Tribes are releasing a strictly limited run of 100 hand numbered tapes. This is your chance to get your hands on a true collector’s item.