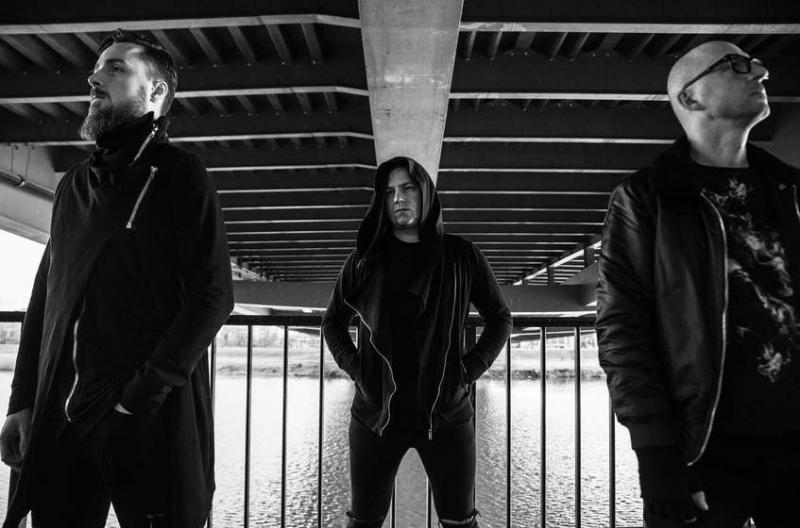 Could you start off this interview with a short introduction of the UNDERTHESKIN, info on how the project was formed and the origin of the name for our readers?
UNDERTHESKIN was formed some time at the end of 2015 I believe, and came about in a pretty spontaneous way. I was listening to a lot of new post punk bands, but the idea of creating my own post-punk, cold-wave band came around years earlier. I had lots of song ideas and outlines already sitting in my drawer, so to say. When I found some spare time I decided to give them a go and begun working on my solo project. I started with the general idea of how to achieve the sound I was after and how the instruments would be used/played. I wanted the music to be recorded spontaneously, on an impulse and mixed in that form. What I mean by that, is recording and mixing without overthinking and countless adjustments, just pure stream of emotions captured in a moment. At the time I also came up with the name UNDERTHESKIN, which, in my opinion, perfectly fits the concept of music that I wanted to create. Music that has the power of getting under the listener’s skin with its emotional depth. That’s how it started. I released the first single “Cold” anonymously, without any expectations, but like a snowball, it seemed to gather more and more good reviews and that gave me even more motivation to continue, as I do till this day:) 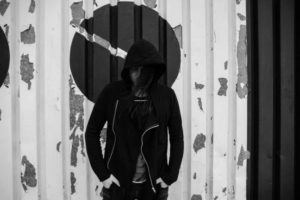 Were you the sole writer and arranger of all material or did you collaborate on this project with other people? Which guest artists are performing on this tour? Tell us a bit about the other players in the band.
Yes, I am the author of 100% of music on the first album and 90% on the album N E G A T I V E. The idea for one of the songs from that album, “Burn”, came about during a rehearsal and the first riff was created by TomTylor, and we composed that song together based on that. Tom is a multiinstrumentalist, a very talented producer and, most importantly, my friend. During our live performances, he plays synthesizers, guitar and does backing vocals. He had his own project called THE LAST SLAVE, and played with the band CLICKS. He was also part of live line-up for DEATHCAMP PROJECT and CONTROLLED COLLAPSE. The person involved with the band is Maciej Dąbrowa, another friend of mine, who was a great support for me when the first album was being created. He would be the first person to listen to the songs and offer his opinion on them. Inspired by my idea of taking UNDERTHESKIN on the road one day, he took up bass and, having already a musical background of playing the piano, he learned the bass within a year. His inclusion in the band live line up came naturally. He is a great bass player and great companion, too. 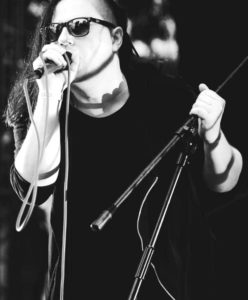 You are very sympathy man. I remember on your original sense of humor, but your music is totally cold and full of emptiness. Can you tell me something about this artistic soul? Do you prefere only melancholy music without positive energy?
Thank you. My memories of our encounter are also very positive. I think I am a rather jolly person, with a sense of humor albeit ironic at times. However I do have my demons, as do all of us, really. And I fight them by writing my music and lyrics. Some say of depression, that it has a wide smile on the surface, and I suppose there is some truth in that. Indeed, when it comes to music I prefer it’s darker side. I tend to find those darker shades and sad undertones in all music I listen to, even pop. I find it quite natural to seek music that in a way, acts as a compassionate friend. You feel like you found someone who went through the same emotions as you and can quietly and patiently relate. I must say though, that I try and have a healthy balance in my life and I appreciate the good and hugely enjoyable things it brings, like playing this not-so happy music. 🙂

Many bands seem to take it a little too easy when it comes to the lyrics. Would you say that the lyrics are almost as important as the music? Can you tell me more about your lyrical themes? What were some of the prevalent themes that helped influence the lyrical content on the new album?
Lyrics are very important for me, but only within their musical surroundings, if that makes sense. I don’t think of my lyrics as poetry, they form a certain narrative, helping to point the music in the right direction to find its way under the listener’s skin. Just where I want it to end up. As for the themes I use in my lyrics, these are like moments in time recorded on paper there and then, often at times of weakness, desperation and uncertainty. They are very personal, but touching on universal subjects as well. They are usually written at the same time as music.

Are there any songs or lyrics that you are very important for your nowdays life?
All the songs of UNDERTHESKIN are important to me, but if I´m pushed to choose those most important I can certainly name “Wrong” and „Done”. 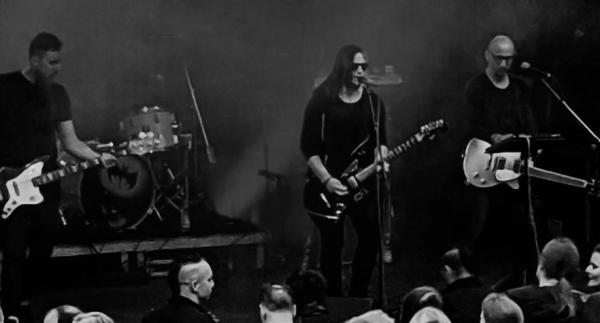 The video to the song “Cold” was really artistic. Who came up with the concept for this video?
Thanks. All 3 official videoclips were made by the same Lithuanian artist called Rytis Titas. I admire his work and sense of artistic aesthetics. It was by accident that I got to talk to him one day, which effected in our collaboration. It always works in a way that I try to express to him what emotions, and potential stories I have and associate with particular song, and see what he comes up with. He, however, often has his vision also, and I trust him with his interpretations just as much. I am very happy with our collaboration and it’s results. Just recently the video to “Poison” came out.

You are member of DEATHCAMP PROJECT. This band was relatively popular and interesting for a lot of fans. How did scene react to your new activities?
It’s interesting that UNDERTHESKIN acquired its very own group of fans, independently from DEATHCAMP PROJECT. It might have something to do with the fact that, as I mentioned before, I started working on UNDERTHESKIN anonymously. I guess I wanted a clean sheet and wasn’t interested in creating music similar to DEATHCAMP PROJECT. I also did not want to be viewed and possibly judged through my previous work. I think there might be about 5-10% of Deathcamp fans who are interested in mine and Betrayal’s solo offerings (Betrayal has an electro project called DUSK WATCH). On one hand I am a bit surprised by this, but on the other hand I see it as a kind of victory, as I managed to free myself and prove myself in a different kind of music to DEATHCAMP PROJECT. What’s more in the last 3 years I have achieved more than with DEATHCAMP PROJECT in over 10 years. 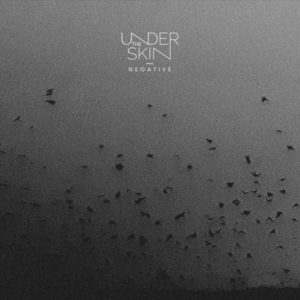 Sorry, last question about DEATHCAMP PROJECT. 🙂 You have developed a diverse musical career… How do you value your musical legacy?
Legacy is a big word. 🙂 Hmm, I could’ve recorded at least two more albums, I think, but I am glad that two came out. I can’t complain. DEATHCAMP PROJECT has played a huge part in my life and I feel it’s not quite finished yet. I like both albums (“Well-Known Pleasures” and “Painthings”), although with hindsight, I would have them sounding better. I’m afraid the sound has not stood the test of time that well, but, apart from that, the band has earned it’s place in a history of Polish goth rock. And I believe the songs are good. Something quite different is single Rain, released in 2016, which in my opinion is one of the best songs I have written, ever.

What are some of your thoughts on the evolution of the Goth scene throughout the years?
I’m afraid I see goth scene in a creative agony nowadays. I can see though, that with new generation taking over and riding the modern post-punk wave, there are more and more bands with clearly goth rock sound, which might lead to a whole new wave of goth rock, who knows, maybe stronger and better than ever?

How do you see Polish alternative (or metal) scene these days?
Metal scene has always been very strong in Poland and these days is valued and respected all over the world. I should add it’s one of the very few things to come from my country that I am really proud of. As far as alternative scene is concerned, I think it is getting better, there are few new good bands around, also Polish hip hop seems pretty strong, though I am no expert on that. There is no doubt that in terms of music our export to other countries consists mainly of black and death metal, which is very pleasing, especially coming from this catholic country.

What are some bands or musical styles that have influenced your music and what are you listening to nowadays?
I usually look for inspiration beyond the genre I myself fall in and create within. I listen to a lot of varied styles and artists. I have recently attended a gig by SUEDE and find myself listening to their songs almost daily, getting re-acquainted with their discography. Other new music I recently listen to is by RIDE, DRAB MAJESTY, THE CINEMATIC ORCHESTRA and lots of new metal releases. At this moment I am listening to GHUM – „The Coldest Fire”- sounds really interesting.

What is planned and what do you hope to experience as a band in the future?
First of all next part of the N E G A T I V E tour. We will play in Italy, Norway and Spain plus some gigs in Poland. I am also planning to release the first album on vinyl, as I think it deserves it. There are also plans for a second press of N E G A T I V E CD, as the first press has just sold out. I am hoping the band will continue to evolve and hope for more gigs, festivals and most importantly to record an amazing third UNDERTHESKIN album

Do you have a final message for our readers? Thank you for your time. 🙂
Thank you for perservering with me till this moment. Give UNDERTHESKIN a listen and pop in to one of our gigs. Thank you very much for the interview.