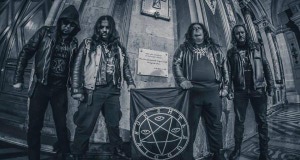 Established as a band in 1999 AB in Santiago, Chile, it is conceptually/spiritually focused on exploring/experieencing the dark side of life and death, abiding by the commands reevealed/dictated by The Old Ones, in ideological alliance with the literary legacy of American writer, Howa ard Phillip Lovecraft. Music cally/Artistically, it is devooted to keeping alive the black flame of METAL, much as its predecessors INCANTATION, SHUB NIGGURATH, IMMOLLATION, PENTAGRAM (Chile), MORBID ANGEL (old), MORTA SKULD ,DISMEMBER, SADISTIC INTENT, DEMIGOD (old), MORTEM (Peru) and soon.

UNAUSSPRECHLICHEN KULTEN is s not a band that cuts “records” no, they construe a whole concept:the will of preservation/tradition of the nameless, ancient, superstitious and underground cult consolidated under the „Occult Death Metal concept.

A present, UNAUSSPRECHLICHEN KULTEN is presenting a live show of one of the stronggest performancces/rituals that can be witnesses in the southern lands: Professiional sound and destroying, energetic mise-en escene. Their performances have been seen in Europe: Germany,Dennmark, Belgium, France and Spain have seen them shar ring stage with NECROHOLOCAUST (Can), VOOIDS OF VOMIT (It), BLASPHEMOPHAGHER (It). whilst the rituals in Chile have had them sharing stage with AFTER DEATH (USA), IMMOLATION (USA), GRAVE (Swe), and with the Chilean bands GODLESS, DIABOLICAL MESSIAH, FORCE OF DARKNESS, DEMONIC RAGE and MAGNANIMVS among many others. 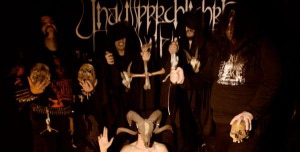 “CHAPTER V: The Madness from the Sea”,Spertains to five manif festations from The Old Ones plus a song from the Peruvian gods MORTEM, recorded at DM6 studios and released as part od thei CD split with the atmospheric Occult Death Black Metal band AFTER DEATH from the USA, headed by Mike Browning (MORBID ANGEL, INCUBUS, NOCTURNUS, ACHERON). Their part of the split is called “Dwellers of the Deep”.

During winter 2013, they do a tour of 7 dates around Chile and Perú called “LUUCIFER POSEIDON”, where they shared stage with the Death Metal legend MORTEM(Peru) among other bands.

The year 2013 3 they edit two of their Chapters under the german label “Iron Bonehead”:CHAPTER VI “Lucifer Poseidon Cthulhu” EP 7” which consists of 2 exclusive songs plus one cover song from mighty PENTAGRAM (Chile) and the CHAPTER VII. “AZATHOTH – Azazel/Thot” Split 7” together with their coreligionaries from GODLESS (Chile).

The year 2014 4 they edit the third studio album called: CHAPTER VIII “Baphomet Pan-Shubb Niggurath” under the labels: Iron Bonehead and Dark Descent. Currently they prepare for their secon European tour in September 2014.