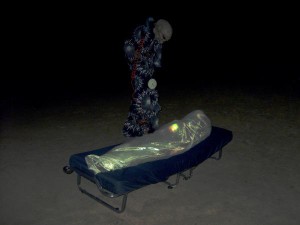 Active since the early 2000’s, TODESSTOSS is the creature of Martin Lang, a German musician, poet and painter that has left a lasting mark on the metal underground with his eclectic style. Lang’s music is a reflection of his composite visual art and inventive poetry, a surrealistic and theatrical mise-en-scène, as disturbing and darkly bizarre as it is daring and provocative.

TODESSTOSS’ previous work on I, Voidhanger Records, “Hirngemeer” (2015), was a mind-bloggling, vicious tangle of cacophonous black metal, spooky doom, dark electro-rock and weird psychedelia, propelled by a cold and primitive drum-pulse. No less stylistically lunatic, the new album “Ebne Graun” (a play on words translatable to “The ‘orror Pla’n”) is probably even more hallucinatory and mysterious, certainly more epic and frightening in concept and scope. It features one single 46-minute long track, a majestic and dreary funeral dirge slowly carrying the listener through the barren lands beyond Existence.

With the help of Flesh Of L. (vocals) and Euer Gnaden (bass), for “Ebne Graun” Martin Lang has carved his most dreadful visions of keen insights and horror, where gigantic waves of black metal guitars first dilate reaching breathtaking emotional peaks, then deflate and crawl over the doomy pace of the rhythm section. On the creepy cover photograph – that Lang shot by mere chance during Totensonntag, a German religious holiday celebrating the dead – a Grim Entity is clothed in an astral dress, its claws tightly holding a snake sceptre that slowly tries to feast on the last rays of life from a departed human being…

Is that our ultimate destiny? A larval existence in a grey domain of infinite nothing? TODESSTOSS explored such a terrifying dimension, and “Ebne Graun” is their testimony.