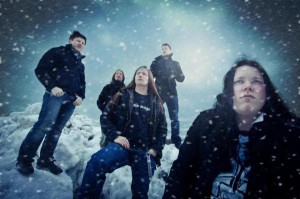 THE HYPOTHESIS is a modern melodic death metal-act formed during deadly cold winter 2009 in Kouvola, Finland. Nowadays Helsinki-based band swears in the name of heaviness, groove & catchy melodies, still not forgetting the technically played crunchy riffs. THE HYPOTHESIS main man Juuso Turkki came up with the band’s name wanting to create an individual state of imagination.

In the year 2009 THE HYPOTHESIS recorded an EP carrying the name “Nightshade”. In January 2011 “Nightshade”-EP was followed by 2 singles “Weak Story” and “Shades To Escape”. The Hypothesis had their first line-up changes when a drummer called Rolf Pilve (from Stratovarius) joined the band. With Rolf The Hypothesis recorded their third single, Scarface.

Among succesful releases The Hypothesis has conquered many famous festival-stages in Finland such as Nummirock and Qstock. The band qualified as a winner from Finland’s Wacken Metal Battle qualifiers in Qstock-festival. The Hypothesis has also shared stages with melodic death & doom giants like SWALLOW THE SUN, SCAR SYMMETRY, WOLFHEART & BEFORE THE DAWN.

In the fall 2012 THE HYPOTHESIS started fresh with entirelly new line-up and locked themselves in the middle of a dark forest of Viitasaari to record their debut-album, “Origin”. After almost four-year-silence THE HYPOTHESIS recruited the last new members from Finnish metal scene whom have contributed in bands like NAILDOWN, PARADISE LOST, DIMEBAD BEYOND FOREVER, DEAD SHAPE FIGURE, CODEON etc..

In 2016 After releasing their first music video “Eye For an Eye” THE HYPOTHESIS started their touring year with WOLFHEART & SWALLOW THE SUN.