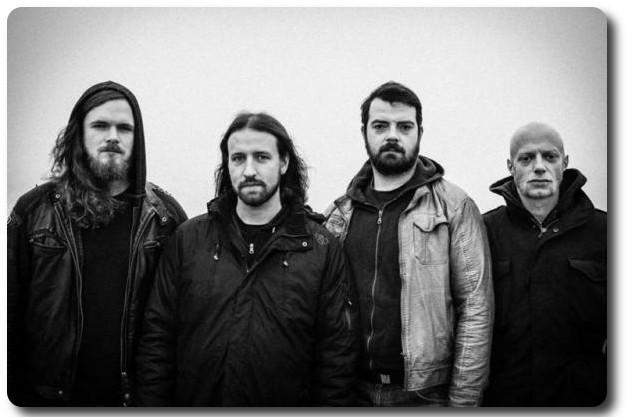 Hello! Before we start with questions I would like to ask you about your personal feelings after a release of “The Great Cold”. Everything goes according to plan? Did it meet your expectations, when considering a lot of aspects, for example sound.
Hej Alleš! Since this is our first release it is hard to say if it goes according to plan, we didn’t really know what to expect. We put a lot of work into the preproduction, so we had a rather precise idea of how the album should sound and the recording process should be organized before we entered the studio. When we finally arrived there, we found ourselves in amp heaven – shitloads of distortion pedals and cabinets to play with. We only booked for 5 days, so a lot of decisions where made intuitively and spontaneously – listening to the album now, I can’t say if we could have done better. Until we heard the first mixes, we had no idea how the sounds would work out as a whole, but we are very happy with the result and we owe a lot to Henner and Role of the Tonmeisterei studio.

When you started with THE GREAT COLD, did you know what kind of genre you would like to produce? Is this supposed to be some kind of scenic metal music?
I started writing material for this project 2 years before our debut was released and nearly none of the songs of the first year made it onto album, but these songs were crucial for the development of our sound as it is now. I started experimenting with sounds and those „post-ish“ Elements became more and more predominant. At the same time I needed some conceptual limitation to hold the songs together and to determine its structure and feel, so I indeed chose a scenic moment, an aspect of nature I wanted to set into music. This aspect determined our band name and agenda as well as the soundscapes that we create. So its like you implied: the scenic aspect of our music might be more important than its official genre-label 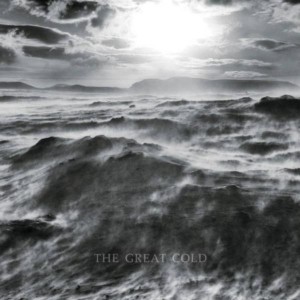 What are your opinions on attempts at trying to merge black metal with nonmetal genres? What do you think about conservative and orthodox bands?
I can understand the orthodox point of view because black metal is music that is quite reduced and for that is sort of restrictive, not only in regard of the playing, but also in atmosphere and concept. So if you make use of it in a way that perverts it’s basic premises by combining it with styles that it deliberately opposes, you first off can be damn sure that you’ll piss off some people (which is fine) and secondly may aim for a musical synthesis that is destined to fail. For me, black metal turned out to be very fertile when mixed with other metal genres and there are also some bands who successfully combined it with rock, but with its gaining popularity in non metal genres, there are also some musical car-crashes out there that are way to cheesy for my taste. The elaboration of the atmospheric aspects of black metal by trespassing the primal rock-instrumentation on the other hand is something I find very interesting.

What is the main idea behind “The Great Cold”? Do you feel strongly inspired by the Germans nature? What would you highlight as its main positives and qualities? What do you think about your home just now?
I was born in the very countryside of Germany and my parents house is located at the edge of a forest, so every day when I went to the nearby city or walked the dog, I’d walk through the forest listening to music and that certainly led to the rather strong connection between music and nature for me. After all the forest might be one of the main qualities of German nature and is definitely on of the eldest and most prominent motives in German literature. As for the concept of the band and this debut, the scenic theme is detached from the German landscape since the idea is to grasp the aura of vast, white and harsh landscapes.

Is there a basic concept on the new album?
The album can be traced back to two recurring main motives that are introduced at the beginning and are emphasized by their divinity, EOS and BOREAS, the first as an allegory of romanticising nature as an appealing sanctuary, the second as nature as a threatening and merciless force. The following songs are named after nymphs that represent the scenic area that was set into music, e.g. Mountains, Breezes, Abyss, and so on. The main idea is that Boreas, personification of the north wind, is transgressing through those different areas and (musically speaking) affects the scene and is also affected by the particular area itself. This ongoing metamorphosis finally finds its climax in the penultimate Song ASTERIAI with a synthesis of both the EOS and BOREAS motives. It’s basically some sort of musical harmonisation of contradicting concepts of nature by adding a dramatic arc that is rooted in mythology, since all these mythologic figures are related in a specific way.

How important is physical CD for THE GREAT COLD? Is it thing of prestige for your band? What do you think about fans of digital formats?
A physical release is of great importance to us, but your question legitimately refers to the fact that we hadn’t yet released the CD when you wrote the questions for the interview. The reason for this was simply that we didn’t know when the production of the CDs would be finished and we didn’t want to wait any longer to get our music out. I personally prefer vinyl over CD and we are going to do that too. In regard of streaming services and the vinylboom, CD is the cheapest and most reliable medium to produce considering the wait for vinyl pressing, but from my experience people tend to stream a lot for free and spend their money on vinyl rather than on CD. You can stream shitloads of music, but your musical biography and future should be determined by the physical releases you hoard in your shelf.

Did you receive any offers from various labels? Where do you see the advantages and disadvantages of independent metal bands?
We already got some offers but didn’t come across something appealing yet. I’d love to be able to outsource some of the daily work I do for the band to concentrate on a stable private life again though.

How do the people in Germany react on your debut album and your music?
Until now we only received reviews of blogs in English, mostly located in the US. We didn’t get press recognition of German magazines yet because we waited for the physical album to submit. The overall feedback was very positive and we are thankful for that.

Are you satisfied with the sound on the debut album? Do you find it representative of your sound?
Yes, we are quite happy with the result. Of course there are some parts on the record that evolve better with the live sound and shine out more due to the dynamic range, but thats pracitcally always the case and the benefit of seeing bands live. We decided to go with this particular recording studio because in my opinion it’s responsible for some of the best sounding records from Germany in the last years. We wanted this album to sound raw but powerful and we got a sound that is heavy but also doesn’t swallow the subtle details that are hidden here and there. Our live sound is always changing slightly because we are tweaking some sounds to keep it interesting for the fans and for us. And: with a new pedal comes new possibilities. I don’t dare to tell anyone what crappy delay pedal I used on the record, but it somehow just works for me and I still use it, but some other pedals I upgraded and they have a great impact on how we sound nowadays.

Your songs have quite complex structures. How does your writing process work? Is it difficult to practice for the concerts?
In writing the stuff in my room with amp simulations and drum computers, it sounds okay and the benefit is that you can realize any idea immediately before it’s getting lost again. This gives me the opportunity to come up with riffs as a whole including all instruments and once you’ve got the raw idea on „paper“ you can emphasize it’s heart and ornamentation. I try to develop as much as possible out of a singular idea, the album for example has a lot of recurring riffs and melodies that vary in tempo, harmony and phrasing but mostly originate from very few initial riffs and tend to fall back on them. When a song is finished we meet and discuss it and start practising it in the rehearsal room and it is during this process when the other bandmembers influence the song with their particular playing and ideas. We don’t use overdubs and samples which is the reason why the rehearsals are that important: Sometimes you would come up with an idea that sounds great in preproduction, but doesn’t work out when we play it together, so you have to overthrow it and start from scratch. NEPHELAI for example I wrote in just one night, ASTERIAI took me more than 2 years, I might have more than 30 versions of it on my computer. 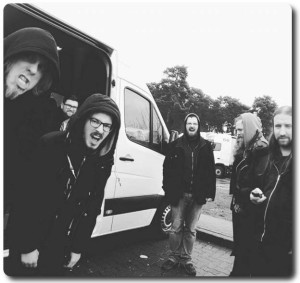 What are your thoughts on today’s metal scene? Do you follow most of the scene or do you stick to the more underground bands?
There are some things that utterly piss me off, like national/racist movements in specific metalgenres or huge mainstream festivals that are designed like an amusement park and boost prices for big bands which makes it really hard for small festivals to keep up. A lot of my old heroes force some shitty beerbrands on their fans and the merchandise products are really getting out of hand because these managers know that metal people are very likely to buy every peace of gear their favorite band offers. That’s why the underground is that important and so very alive (at least in Germany). We’ve got a lot of smaller festivals here that really keep the scene going and a lot of small but dedicated fanzines that also focus more on the great stuff that’s going on in the underground. Those festivals, venues and zines are the heart of the music and this generic mainstream crap is just some old crust that rests upon them.

What are your plans for the future? Are you going to slow down your compositional process and focus on touring or you’re already working on some new material?
I needed a break before I started writing new material for TGC to ensure that I can develop something new and don’t repeat the last record. Had a rough time after the release, so at the moment I’m working on a little doom/sludge EP to let of some steam and I recorded a few songs for a singer/songwriter project. But also I’m nearly done with the first song for the next album and I’m really proud of what I have done so far, can’t wait to go on.

That’s pretty all from me. Thanks for the interview and all the best!
Thank you so much!