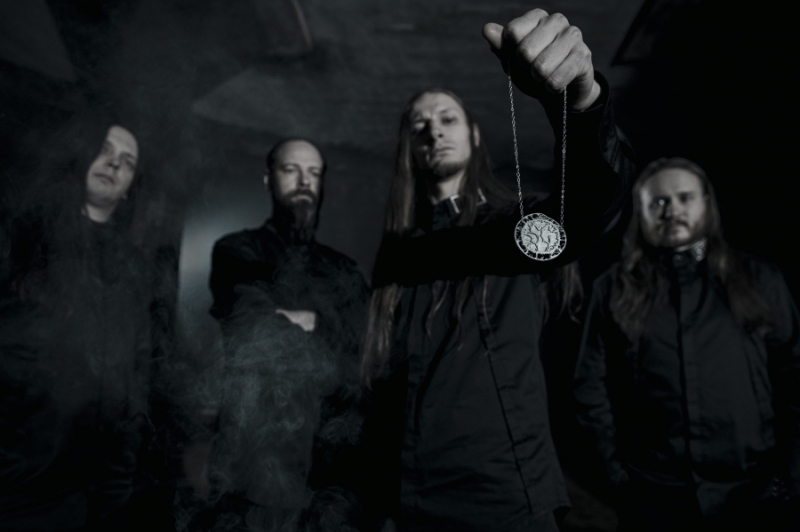 The upcoming album is called “Chapter III” based on the foundations of Old School death/doom sound, at the same time mixed with brighter melodies and more alluring rhythms. One of the most important roles in the album is the emotional vocals, which inevitably forces the listener to experience the emotion of the lyrical character. The main inspiration for the lyrics has been the ailment of the soul, death, and fragility of life.

Hand drawn album artwork shows symbols of Life and Death impersonated by two ladies holding candles, their smoke forms Ouroboros symbol surrounding them, these ideas are planned to be used in live shows as well. Last year the band published a music video called “Samsara” featuring one of the songs from the new album which correlates with the idea of Ouroboros too.

Music Video “Samsara” tells the story of a person who is imprisoned in his daily gloomy routine and soviet atmosphere and has to die every night, and in the morning he is born again in the same world around him, from which he cannot escape. For a long time, there were no representatives of the death/doom genre in the Lithuanian metal scene, and band founder Tenebra decided to change this situation in 2013. The journey there took away as many as 10 members until the desired emotional and musical quality was achieved, the final result of the coming release.

The meaning behind SULLEN GUEST represents experiences and emotions we are inevitably forced to face in our lives: pain, death, loneliness, fear, betrayal… Each one of us has been visited by these sullen visitors. The group members themselves chose symbolic “guest” names in Latin that reflect these emotions: Tenebra, Inanitas, Demissio, Doloribus.