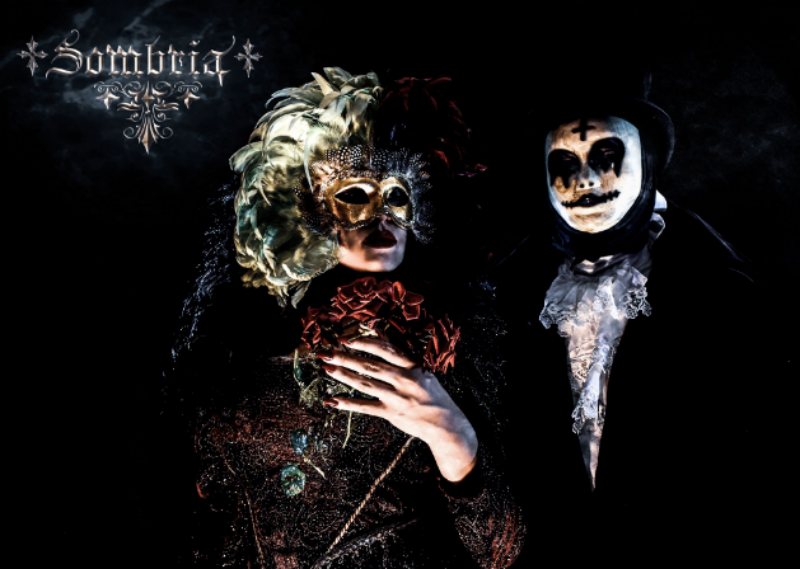 SOMBRIA is a dark/doom melancholic metal project which has been formed by singer/songwriter Dimi De San who, for the purposes of this project comes under the name ‘’Valentina Devin’’ and guitarist/composer ’’Seven Raven’’. Dimi De San’s music path started on 2012 with the formation of the band Caelestia which had been leading up to 2019. Then she decided to stop and join forces with Raven Seven creating this ‘dramatic’, full of emotions project meant to mark the musicians’ music path, -Sombria- .

Their live appearances are numerous appearing with important bands like KATATONIA, ARCH ENEMY, INSOMNIUM, DRACONIAN among others, including raven seven‘s very successful collaborations at big metal festivals. Both have been featured several times in various magazines , with full interviews and live performances while also appearing in numerous tv and web shows.Dimi’ s successful tour on 2019 with Norwegian “Vulture industries”, “ Hellheim” and “Madder Mortem” marked the beginning of SOMBRIA as a life project.

Its main purpose apart from featuring music, acting and dancing is aiming to raise awareness -through their music, lyrics and performances- over many sensitive subjects like child poverty, environmental issues, equality, taboo topics etc. and also focusing on helping people in need as much as possible.“Chirographon Dei” is Sombria’s debut full length album consisting of 9 songs, recorded, mixed and mastered by (Seven Raven) in Raven Seven’s studio.

All of the songs have been composed by seven raven and lyrics created by Dimi De San (Valentina Devin). The album has been released by Finnish Inverse Records. Artwork created by Dimi De San. A music video for ‘’Voyage Into Lethe’’ has been already released as well as a video lyric for ‘’Sarcophagus Of Roses’’. Many more music videos are programmed to be released soon. Musicians Lucien Keir – guitar, Saber Thorn – bass and Winter Cain – drums are the extra members of the project.