SÓLSTAFIR are different. Their unique blend of metal with beautiful melodies, psychedelic moments and a strong undercurrent of classic / hard rock comes as varied and at times appealingly bizarre as the landscapes of their native Iceland. Their fifth full-length “Ótta” is the logical continuation of the musical course this four-piece adopted on the highly acclaimed forerunner “Svartir Sandar” (2011). Expect the unexpected, such as seduction by subtle strings or a hypnotic banjo. None of this was apparent when SÓLSTAFIR released their album debut “Í Blóði og Anda”, which translates as ‘In Blood and Spirit’ in 2002. Instead of today’s Icelandic gravel throated siren chants, frontman Aðalbjörn Tryggvason spit forth vitriolic crust-like vocals and the ripping guitars were clearly black metal inspired. Yet the band was as clearly identifiable back then as now and along their way with the next albums “Masterpiece of Bitterness” (2005) and “Köld” (2009) introducing new elements in a continuous evolution.

SÓLSTAFIR’s music is as much the product of Arctic blizzards as of red hot volcanic magma, erupting geysers, lush green pastures, and salty waves. With “Ótta” the Icelanders touch something ancient and timeless, while defying easy categorisation. This album needs to be heard again and again, to peel back layers of details, each different and yet always revealing the same: great songs – all of them. The song titles of “Ótta” form a concept based on an old Icelandic system of time keeping similar to the monastic hours called “Eykt” (“eight”). The 24 hour day was divided into 8 parts of 3 hours each. The album starts at midnight, the beginning of “Lágnætti” (“low night”), continues through each Eyktir of the day and ends with “Náttmál” (“night time”) from 21:00 to 0:00.

This form of time keeping is more open than the relentless ticking of modern times, where each second is made to count, which turns humanity into cocks of the corporate clockwork. Now SÓLSTAFIR give you the antidote. Just lean back, close your eyes, take your time and lose yourself in this masterpiece called “Ótta”! 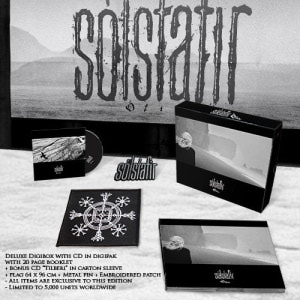