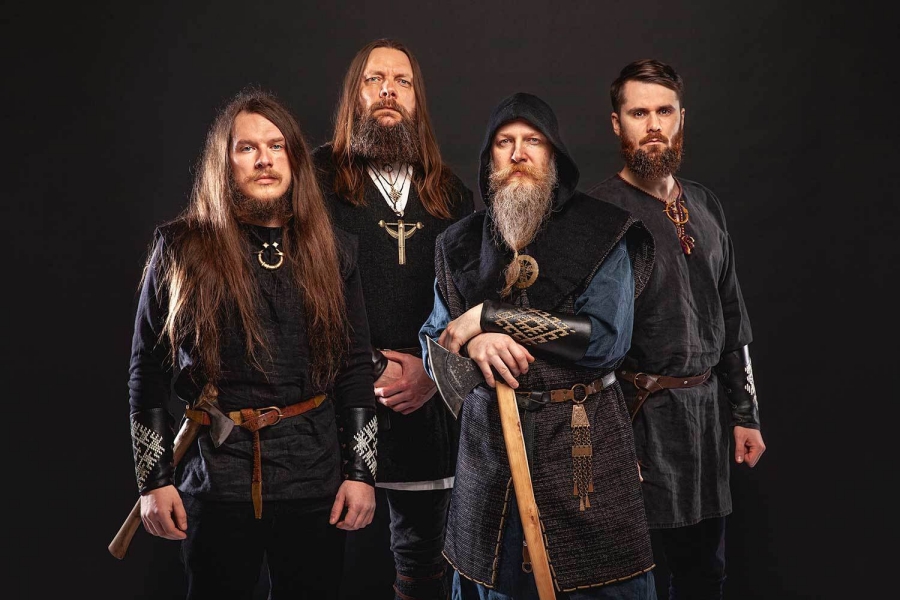 SKYFORGER vocalist Peter says, “One day, Julgī STALTE, the mastermind behind the SKANDINIEKI collective, asked me if we wanted to join them in a song that they have been performing through the years. And so, there it is, our version of Jump, Fir Tree, a folk song beloved by every Latvian that we made a little bit heavier. In the meantime, we have been busy recording our new album and I’m glad to report that things are slowly moving to the final stretch. We are a bit behind schedule due to changes in our line-up and daily works, but hopefully, it should all be done sometime next year!”

“Lec, eglīte” is an ancient Latvian song addressed to the fir tree to jump, leap and dance. It has been sung in many forms and versions for several centuries as a part of the traditional Latvian wedding, at the moment of bringing the bride to the groom. Also, “Eglīte” is a basic percussion instrument. In Latvian mythology, the evergreen fir tree represents eternal life, and is revered as a boundary marker between this world and the one beyond. Traditionally, the wedding itself was seen as an act of dying as a young girl and boy and being reborn as a married woman and man. Fir twigs and branches were used to adorn the bride’s homestead, as well as her seat at the end of the table during the wedding feast, with the mythological purpose of keeping ill-wishers and evil people away, who would just prick their fingers and leave the bride unharmed.

“May a new day always come! A wedding is a celebration of hope. It is a manifestation of your own initiation journey that is now complete, and you – reborn. No longer a young boy or girl, but a man or woman, fully committed to your family, your people and your land. Ready and willing to take charge of the reality, with responsibility and honor,” adds Julgī STALTE, the creative leader of the SKANDINIEKI folk collective. “The most important thing, I think, is to stand tall and keep building a better tomorrow. A tomorrow where weddings and baby showers are celebrated and the wisdom of our forebears is held dear. Our land needs men who are ready to stake their claim to this life. Our land needs women who have realized their full potential and power. And so, we, as musicians, put our time, our skill and our voices together and chant – Jump, Fir Tree!”

The single features Pēteris KVETKOVSKIS on rhythm guitar, Edgars GRABOVSKIS on bass and vocals, Alvis BERNĀNS on solo guitar, Jānis OSIS on drums, Edgars ZILBERTS on kokle, as well as their frequent live performer Geoffroy DELL’ARIA on bagpipes and whistles. Vocals by SKANDINIEKI, recorded and engineered by Gints LUNDBERGS.

Last but not least, SKYFORGER are thrilled to bring their first-ever show to the 31st edition of the legendary Wacken Open Air festival already the next weekend. This festival takes place in North Germany near Hamburg and welcomes around 90 thousand fans from around the planet every year for an unforgettable celebration of heavy metal.

SKYFORGER also wish to remind you about their only major open-air show in Latvia this summer, on 10 September at the Mežaparks Song festival grounds in Riga.

Joining the band at the first-ever heavy metal show thundering on from the brand new stage will be their good friends VILKAČI, the folk and ancient martial arts collective, folk singers DELVE and more fellow travelers.

Befitting the venue, the grand two-hour show will feature unexpected musical surprises and several guest performances, as well as an impressive light show.

Get your tickets to SKYFORGER’s one and only show in Riga and Latvia here:
https://www.bilesuparadize.lv/lv/event/117691