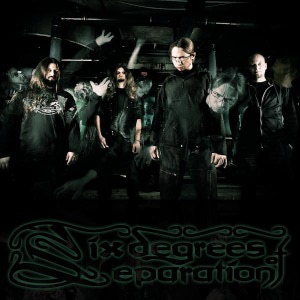 The band history takes us back to final years of the last millennium. In winter of 1996 on the ashes of band called Abyss a new bad arises, to be named SIX DEGREES OF SEPARATIONS. After three months of effort within April a first demo Dark Ages is recorded. The cover art was done by Václav “Dr.X” Sklenička, who was contacted via an advertisement. A lot of concerts, a lot of great feedback and reviews, all in vain… Radek Zábojník and Martin Novák are bound to fulfil their duty to the homeland and the band is put to sleep for a while. After a year they join again to put out a new seven song demo “When Autumn Comes….” A new member joins the band as a necessary replacement for František Dominec, who’s roaming around the world, Vlasťa Urbanec – a guitarist from at that time stagnant band Atomic Tom & Nuclear Jerry. Needless to add – when František returned Vlasťa stayed on so at that time the band works on three guitar base.

Further very positive feedback, reviews and references from local and from abroad as well just called for an official release. And that’s come. On 21.6.2001, on the solstice day, a debut album “Moon 2002: Nocturnal Breed” is released. An album where mystic moods and power corresponds with previous demos supported with better instrumental abilities of the band. Perfect harmony of the melodies and bursts of energy are emphasised by duets of Radek Zábojník and Magdaléna Malaníková. All this together with great artwork by Václav Dr.X Sklenička range this album among the existing top of czech underground, which is once again confirmed by many welcoming reviews from the motherland, but also from abroad. Shortly after the recording is finished, the founding member, guitar player Frantisek Dominec quits the band, nine months afterwards the keyboard player Miroslav Minarik leaves as well. The band performs, tours festivals, for the first time tours also Austria and Switzerland. The keyboard post is not replaced so for the first time the bands presents itself with pure guitar sound only. 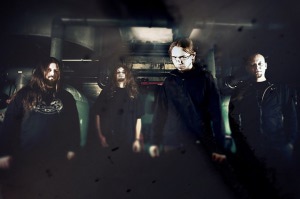 At the beginning of 2003 another line up crisis takes in – founding member drummer Martin Novak and the singer lady Magdalena Malanikova leave the band. Replacement for the drum throne has been found soon enough in Pickard, who has fallen in and caught up with the band quite quickly and within his possibilities has learned the song set, so thanks to this the band has avoided any longer off-the-stage period. The post of the female vocalist is left unoccupied just like the keyboards. Even during this difficult period of time more new songs are written, the band produced two demos, gives performances and gets ready for the successful debut successor.That has been realized during September and October 2004, when SIX DEGREES did some recording in the Sopa studio of Standa Valasek and in LSU in Veseli nad Moravou, and so the second official album has been born, called “Triotus, Tricephalus and Tribadism”. It is released at the beginning of 2005 again under Élysion, later in cooperation with SP2 a slightly psycho video to “Light Hates Me is shot”.

In relation to good responses to the Tri album the band has enough opportunities to perform live, and these are not missed. Apart from lots of small concerst or local festivals the band performs on within genre prestigious festivals, such as Brutal Assault, Metalmania or Basin In Fire Fest, and in cooperation with Galadriel organises and performs on two shows with ROTTING CHRIST. In time new songs are created, which are recorded on three demos, towards the end of 2006 the band hides away in the rehearsal room to finalise preparation of the new record. In February 2007 the bands enters insufficiently acclaimed Šopa studio, where under supervision of the producer Satanislav Valasek, and tech supervision on the drum recording by Vlastimil Kozubik (RUDE KOSTRY, PALADRAN), Chain-Driven Sunset album is recorded. Since the spring of 2007 the band returns on stage and presents also the new not yet released songs, but also more consistent sound, which is in control of the fifth band member, Otto von Kreutzel, alias Zrnko.

“Chain-Driven Sunset” is nominated for “Břitva” award (independent publicists) and “Anděl” award (Popular Music Academy). Band does a lot of club gigs to support the album, but also a few bigger festivals such as Basin In Fire (QUEENSRYCHE), Metalmania (MEGADETH) or Masters Of Rock again. And new songs slowly take shapes, progressively demo recorded and polished up to Septemer 2009, when the band enters Šopa to record the Of Us album.

Of Us album is released at the start od 2010 and the band gets ready for another challenge – shooting of a live concert for a DVD, which eventually takes place in February at FHS. Following is support of the Of Us album, accompanied by CRUADALACH and ABSTRACT the band is touring Czech and Slovak clubs. Even during the summer festival season part of the band keeps working on the DVD production, and also new songs are being written to be published with the DVD. These are recorded in January 2011 at the Šopa studio once again supervised by Staňa Valášek. The set called “Ubl” is first released at FHS again, exactly one year after it was recorded just there.

Ubl is awarded “Břitva” for the best video of the 2011, but the band, tired after all the activities from previous year, takes a break to ponder on current state of things and to decide what happens next. While Vlas joins reunited Hypnos initially as a guest appearance (and brings in also Canni for a couple of shows) the band starts to rehearse again with the aim to write material for a new record. That is eventually realised during June 2013 in the Šopa studio, again under supervision of Staňa Valášek, and is eventually released by MetalGate under the name of “The Hike And Other Laments”.