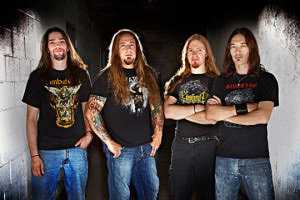 SINGLE BULLET THEORY have announced their first return to Texas since 2005. The “To Hell Paso and Back Tour” launches in Levittown, PA on September 20 and moves through New York, Ohio, Indiana, Missouri, and Oklahoma before invading Texas on September 30 in Fort Worth. Featuring former PISSING RAZORS guitarist Matt DiFabio, SINGLE BULLET THEORY is planning to perform a couple of Razor’s tunes as part the set. For a list of shows and tour updates visit

The band is touring in support of its recently released self-titled album, which is a retrospective look at some of its older material and includes remixes, remasters, and a few unreleased songs. Fans can pick up the album from the band at shows. Single Bullet Theory is also available at

In other news, SINGLE BULLET THEORY now has its own hot sauce, which will be available on the first run of tour dates. Two different brands are available for mass consumption, including Damnation (a spicy habanero/mango blend) and Route 666 (very hot ghost pepper orange sauce).

“To Hell Paso and Back” tour dates: