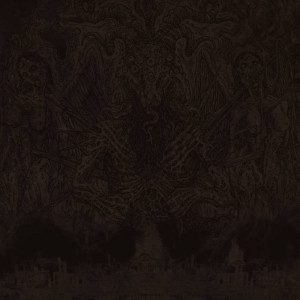 While the European extreme metal scene more and more becomes a ‘neo-occult’ wasteland with each passing day, the rest of the world still offers bands that live the old spirit. In Peru, the underground has kept the vibe that was resonating in Europe throughout the 80s. This can be sensed in the music of RITO PROFANATORIO.

On its second album, ‘Grimorios e Invocaciones desde el Templo de la Perversion’ the band plays rancid Death/Black Metal filled with hatred, negativity and the traditional southamerican taste of violence. The sound and the speed pay their tribute to the works of HELLHAMMER, early DEICIDE or MAYHEM in their ‘Deathcrush’-era. The album is crowned by some very nasty vocals.

This is going to bring tears to the eyes of true old-school maniacs! The new album of the fanatics from RITO PROFANATORIO! Thirty minutes of 80s-style black/death metal with everything an underground warrior could long for: fast drumming, nasty screaming, brutal riffing and a crushing production.

Let this Peruvian band take you back to the old days, when metal ov death was not corrupted ! This is the true descendant to the legendary works of such as HELLHAMMER, SARCOFAGO, CHAKAL or MUTILATOR!