RIMFROST start out in summer 2002, when 14 years old singer and guitarist Hravn joins forces with drummer Throllv of same age under the name MÖRKRETS FURSTAR (“Lords of Darkness”) in the Swedish town Hagfors. In October 2002 they record a first demo on a four-channel MD4 and the result is self-titled to “Mörkrets Furstar” After playing primitive Black Metal and exclusively using Swedish lyrics, the band changes its name to RIMFROST and a more technical style just one year later.

In these early years the members of the band are still a bunch of school kids, but driven by a strong will and burning desire to play Black Metal. Their first demo under the name RIMFROST is recorded in the year 2003 in the Hairy Bones Studios in Karlstad. “Unredeemed Demons” features English lyrics and is released in only ten copies although the booklet states fifteen. Spending most of their time in the rehearsal room Hravn and Throllv quickly progress in their abilities as Musicians and songwriters. One year later the band is getting serious. Joined by bassist Frozthirw they enter the Black Lounge Studios in Avesta to recorded new demo songs with producer Jonas Kjellgren and the declared aim to acquire a record deal. These demo recordings become known under the title “Winds of Hostility” (2005), but are never published. There is immediate interest, but the labels ask for another song. RIMFROST return to Avesta and accordingly record “At the Mighty Halls They’ll Walk”. 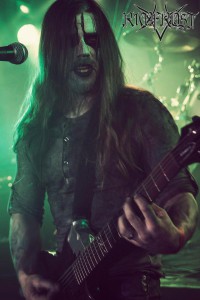 RIMFROST receive a good offer and the members being young quickly sign a deal.The signing includes one EP and two albums. The Swedes release three of their demo songs as an MCD in December 2005. “A Journey to a Greater End”. The first reactions are enthusiastic and RIMFROST get chosen out of hundreds of contenders to perform at the prestigious Inferno Festival in Oslo, Easter 2006. The Swedes’ performance is greeted by fans and press alike as one of the very coolest newcomers this year and introduces them to an international audience.

All seems bright, while RIMFROST prepare for their debut album, but during the rehearsals Hravn and Throllv decide to part ways with Frozthirw. As a new bassist the duo recruits Beuwolf, who has already performed with them as a live guitarist and shares the other members’ visions on musical expression and professionalism of performance. During six days in August 2006 RIMFROST return to the Black Lounge Studios to produce their debut album with Jonas Kjellgren once again. “A Frozen World Unknown” is released on the 28th of October 28th the same year.

Although the album is received with critical acclaim, dark clouds are now gathering on the horizon. The band discovers that it has serious disagreements with its label and Throllv moves from Hagfors to Borås. The long distance between the members as well as the search for a new label after the band decides to quit their previous deal effectively put all activities on hold. 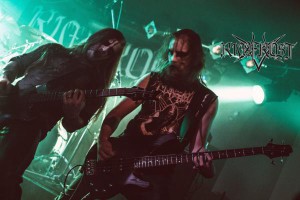 In January 2008 Hravn follows Throllv to Borås and RIMFROST is infused with new live. After extensive rehearsals and writing new material the band signs a new deal with Season of Mist out of several interesting offers. After almost a year of preparation it becomes clear that now Beuwolf lives at too great a distance to continue playing in RIMFROST. Both sides conclude with regrets to part ways as friends for the time being, but Beuwolf continues to assist the main duo in its song-writing and will hopefully join the band again as a guest musician in future.

Without a permanent bass-player in the band, Peter Laustsen (Nox Aurea, ex-The Cold Existence) takes over those duties as a session-member and plucks all thick strings during the recording of “Veraldar Nagli”. RIMFROST’s second album is brought to perfection in Sonic Train Studios with renowned producer Andy La Rocque (KING DIAMOND) heading the proceedings and assisted by Peter Laustsen as well as the band. With the second album released, “Veraldar Nagli” on November 16th, 2009 (January 12th, 2010 in the USA) a new chapter in the saga of RIMFROST starts, however, even if received with great words from fans around the world, there is not much happening in the RIMFROST camp. Only two shows is done to support this album and then the band ends up in a coma. 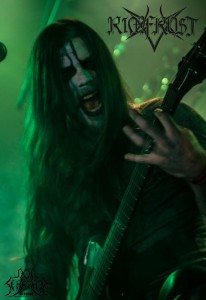 RIMFROST main demons, Hravn and Throllv, starts working on new music, but there is something missing, and on top on that the band decides to part ways with session bassist Peter Laustsen in the fall of 2011. The band has set it sights on a new bass player, even if first declining the offer to join, B.C joins the band in early 2012, soon after follows the first “music-video” of RIMFROST with a brand new song for the masses “Witches Hammer” is released and the band starts to breath again.

From the video on, the band starts more forceful to work on new songs to complete a new studio album. During this period the band also did a few gigs to get the new line-up in perfect balance. Starting with it`s first appearance in Germany ever, the band plays in Hamburg on “Metal Days” in September of 2012, then back to work on the album until it reaks of grim RIMFROST tunes, this taking
a good time, to make sure its perfect, then to do shows again in 2014 in both Sweden and in Germany.

In early 2015, it is finally time to hit the recording button, the new album gets recorded and in mid 2015 the band starts the search for a new label to put this out. The band names the new recorded fittingly, “RIMFROST”. Taking a while to choose the mixing partner,the band finds the label to put this new beast out, “NON SERVIAM RECORDS”, and inks a deal in October. The mixing partner is soon after chosen and the mixing started on 23d of November 2015.

The third album of RIMFROST will strike down everything in its path on March 18 2016 and make sure to show that RIMFROST is neither dead nor decaying, but stronger then ever! This is RIMFROST in every inch of sound, words and art! So behold the kings,and make sure not to miss out on this album!