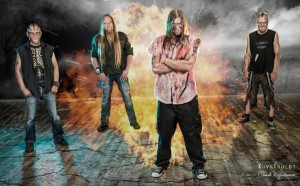 In the year 2003 two brothers Anssi (voc.+ gtr) and Ossi (drums) started to play together some angry-finnish-metal. Everything began with cover songs and pretty quickly first own songs started to come out. Later a bassist and a second guitarist joined in and something explosive had been born.

After furious training first demo “Verisuot” came out and few other demos was released in 2005-2011. Years elapsed and some members left the band, but in 2013-2015 the band was complete again, when Sami starts at bass and Make at 2nd Gtr. This crew started to work the band’s first full-length album immediately. So an album called “Oksat pois… ja osa latvuksista” is released November 11th 2016 via Inverse Records. The album mostly includes re-recorded older pieces.