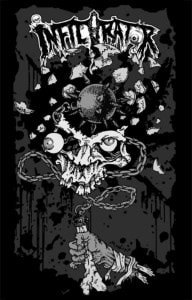 Fast, filthy and diabolical, Philadelphia’s INFILTRATOR have released their self-titled EP on cassette through Unspeakable Axe Records. It is the must-hear speed metal assault of 2014 and the complete EP can be streamed at bandcamp.

The band released their debut EP last year as a download only. Now Unspeakable Axe Records has put it on cassette: black with gold metallic print, and limited to 200 copies. INFILTRATOR shares a member with both death metallers TRENCHROT and trad-doom group CRYPT SERMON. With an identity all its own, the group bangs out classic speed metal riffing and one fire-bombing solo after another, while the tortured howl of front man Steve Jansson sounds like the first bloodthirsty mutant to crawl out of the crater once the apocalypse is in full bloom.

The tape is for sale at: http://www.unspeakableaxerecords.com/purchase/