Hello! Whats is the current status of the band from a musical standpoint and why the audience should give a chance to listening to PERDITION WINDS?
R.A: We are active with the gigs and writing new material at the moment. Our skills with our instruments are better than 15 years ago when we were first time playing some riffs and writing some songs poorly. Now we can actually materialize our visions the way we see fit. Why someone should listen to us? Can’t really say. If you are bored about these new super technical Black Metal bands, and enjoy the old school way more, then you probably should give us a try. We bring nothing new to the scene, more like something old, ha hah…

J.E: If you like your Black Metal untamed, filthy and ferocious, yet something „fresh“ instead of those classic albums in your shelve, then you should take a listen to PERDITION WINDS!

What did you set out to accomplish with „Aura of Suffering”? What was your mindset going into creating the new album?
R.A: I don’t think we had any goals with the album. I think we were more like trying to create songs that we would like our selves. At some point we just noticed that the songs will be lengthy ones, and with that in mind, not so ordinary. In some of the songs music was done first, and the lyrics later, but with some of the songs we did it the other way around; lyrics first and by reading those, you get some atmosphere created, that helps you out with the riffs. At least I get the feeling of what kind of song I want it to be, by reading some lyrics. Some feels automatically that it should be slower and depressing, and some give instantly the feeling that it should be fast and hateful. 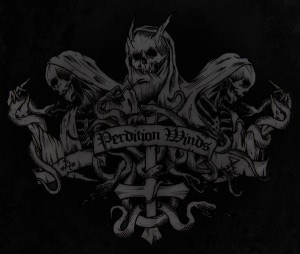 Did you achieve the sound you were hoping for? Are you satisfied with the sound on the debut album? Do you find it representative of your sound?
J.E: Without further analyzing I find the sound and the “production” good indeed. Raw and filthy soundscapes yet clear enough that you hear what´s going on. Definitely representative!

J.K.A: After a few different mixes this was by far the best one,so we are very happy indeed. And very big thanks to Henri for the help!

R.A: I’m really bad with analyzing sounds. I know only good sound and bad sound and this album sounds exactly as I had it in my mind, so T.K. Did great job with mixing and Henri Sorvali with mastering.

This melodic side of PERDITION WINDS goes quite well with the aggressive and speed like side. Do you try to find opposites this way, or do they play together as the different sides of the same emotional coin?
J.K.A: Well, we listen to a lots of different kinds of music with different tempos and shit, so maybe that effects the songs. I don`t know? It would be pretty stupid to deliberately aim fast or slow.

„Aura of Suffering”has this really awesome old school sound to it,but the roof of your music is full of actual elements. Do you agree with my opinion?
J.K.A: I don`t understand the question,but lets say: yes.

R.A: Don´t know what you mean by these elements, but I would say that without any deeper analyzing, we trust strong riffs, so there is always some actual riff playing in background and creating the atmosphere instead of just some random chords. 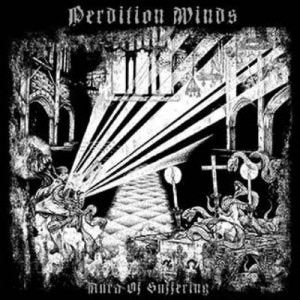 How important are the lyrics? Tell us the lyrical concept behind the music.
J.E: This is Black Metal! Lyrics are important, of course, that goes without saying. Main lyrical concept on the album is Satanic/Luciferian. Texts deal with madness, bloodlust, possession, DEATH and Path of the Black Flame (Left hand path). I have a thought / idea for a lyrical piece and I start to „picture” it with words. My lyrics are not meant as guidelines for anyone, they are my inner voices speaking through.

J.K.A: Lyrics are as important as the music. Shit, hollow, meaningless bantering can cripple a song completely.

Are there any bands in particular that have been a source of inspiration?
J.K.A: Everything from CELTIC FROST to Katharsis.

How would you describe the metal scene in Finland and what are some good bands that you would recommend from your home country.
J.E: Metal scene in Finland is very much alive. Very viral and full of new blood! Some great underground Metal bands, not mentioning the obvious ones, though, are; LANTERN, CORNIGR, LIE IN RUINS, EXORDIUM, SEPULCHRAL AURA, UNCREATION’S DAWN, FLAME, ANXIOUS DEATH and SLUGATHOR, to keep the list short.

A lot of people say that metal music in Finland is really mainstream. Radio show, Tv show….metal every day on air! Is it good condition for underground metal bands?
J.E: We don ́t give a shit what happens in the „mainstream” or anywhere else, really. We do what we do and that ́s enough for us!

R.A: Yeah, you can see some hard rock bands, and even some metal bands in news headlines, tv, radio, etc. All the time, but usually no Death Metal or Black Metal. If you like some symphonic soft 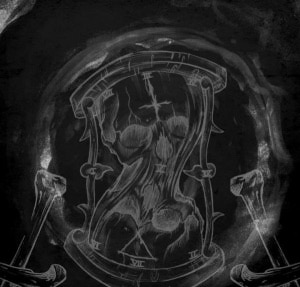 „metal“ music, Finland might be your paradise, but with Underground Metal, the situation is pretty much same than in any other country.

Piece of philosophy! What is the bigger evil for human beings? Church or God?
J.E: Greed. This could include church but also Islam, Communist / capitalist / fascist regimes but above anything else corporate elite and especially Banks!

So, your future plans ?
J.K.A: Well of course a new record and some gigs somewhere in time.

R.A: Also we have already recorded a split with Russian band Drama, and that would be nice to get out of the way before doing anything new…