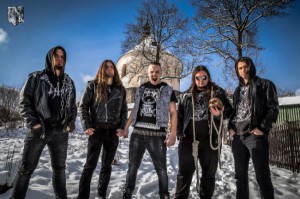 PANYCHIDA just released an official lyric video for Josafat (The Gathering) from their upcoming album Haereticalia – The Night Battles. The 4th studio album of the quintet from Pilsen (Czech Republic) will be released in 2016 via Cursed Records.

The album marks new progress in the bands EVILution. Panychida draw inspiration from different metal genres while still focusing on melodic backgrounds, thus the band labels the album as blackened heavy metal, because METAL is what counts. Be prepared for Haereticalia – The Night Battles, release date and pre order info to be announced soon.