PANTOMMIND is progressive metal band from Bulgaria. In 1993, in a small town of Gabrovo, a few friends gather up to play their favorite music. These are Pete Christ, “Floyd” Rossen, Jiip Randam and Lambie. They call themselves with the strange name “LAVENDER HAZE”, while their music protrudes influences of QUEENSRUCHE and shows affinity towards different electronic motives and complex compositions.

Two years later, the band is finally completed with the joining of the emblematic vocalist Tony Ivan, and drummer Drago. 1995 marks the change of the band’s name to “PANTOMMIND”, as well as their first studio recording – the song called “Every Dream is a Game”. Another year passes in recording of new material, and in 1996 the demo EP “Unreality” becomes fact. It includes 4 songs: “Dream From”,”Unreality”,”Somewhere In The Space”,”Let Bygones By Bygones”.

In the period 1997 – 1999, PANTOMMIND’s members Tony Ivan (vocals), “Floyd” Rossen (guitars), Pete Christ (guitars, keyboards), Drago (drums), Dean “The Boss” (bass) record another, this time full-length demo “FAREWELL” in the home studio of Jiip Randam. With the support and help
from Carlos Vaz , the demo album rises an incredible interest toward the band in worldwide underground circles. At the turn of the new Millenium , the bass-player Dean leaves PANTOMMIND due to family reasons, and is replaced with Dido (who had been playing with them in their earliest period). The band survives two hard years of unsuccessful attempts for “breakthrough”, followed by a new creative
period. 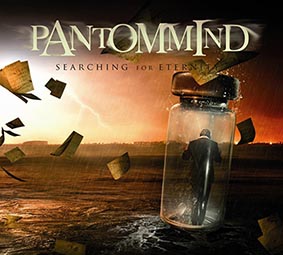 In the spring of 2003, the keyboardist SunnyX joins PANTOMMIND, together with guitarist Peter Vichew, who replaces “Floyd” Rossen. In this refreshed team, the band creates some of its best songs to date, setting the beginning of the project “Shade of Fate”. The album is recorded for one year, followed by active promoting of demos overseas,successfully finalized in the end of 2004,when the band signs a licensed contract with “Lucretia Records” to release in Europe, and with “Sensory Records USA” for North America. “Shade of Fate” receives flattering reviews in specialized press and a strong rotation on the air of many popular metal radio stations around the world.

The leading booking agency INTROMENTAL Management – Denmark takes the band under its wing, while the Director Claus Jensen categorizing “Shade of Fate” as one of the top progressive metal albums for all of 2005 worldwide. Two unforgettable years follow, during which PANTOMMIND play several big and memorable concerts, the most significant being with Fates Warning (February 2005) and with Helloween (January 2006). In the same period the band is invited to perform at the most prestigious festival for progressive metal music – PROGPOWER Europe in . In the year 2009 Pantommind was picked up by the american label Spectastral Records who released their second official album “Lunasense”. The album was accepted very well in the underground stage of prog metal and it was voted #1 of the best progressive album of 2009.