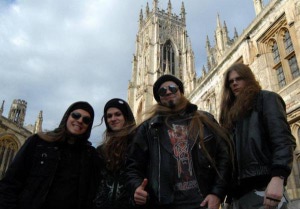 “With ‘Age Of Pandora’ we’ve made, what we haven’t reached with it’s album predecessor. Aggression combined with harmony, technical parts combined with silent nuanced, more emotional, orchestral passages. Even on lyrical level I’m very satisfied this time. There are no clichés at all on these new album, but true real-life topics and very own feelings, which have a deep meaning for me and the band. Simply perfect for our fans to get eventually ‘lyrical mirrored’ so to say.”
(Dom R. Crey)

In April 2011 NOTHGARD has released their debut album called “Warhorns Of Midgard”, which received rave reviews. In the same month they performed their first European tour together with SKYFORGER, HELJAREYGA, GERNOTSHAGEN, KROMLEK and NORTHLAND. 2012 Skaahl of the mighty WOLFCHANT joined NOTHGARD as their 3rd guitarist. Since then the line-up is constant and stronger than ever.

The new material of NOTHGARD will be bombastic, epic and very technical simply because all three guitars establish a new way of a harmonic interplay between rhythm and double-leads. Beside this “Guitar-Orchestra” the orchestra parts of the keys ensure pure epicness and heroic power all along the line.

Pls. note the special guest appearance on the new album:EQUILIBRIUM singer Robse participated with his martial voice at the new NOTHGARD song “Obey The King” !!!