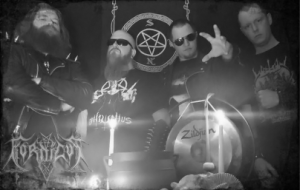 Kentucky USBM Horde FORNICUS have just released Storming Heaven on digital format with a CD release scheduled for August 26. Stream and/or purchase Storming Heaven in its entirety at this location. http://fornicus.bandcamp.com/

Birthed in the heart of America’s Bible belt in early 2013, FORNICUS was conceived to cast darkness over the ignorant masses and their foolish dogmas. Blending qualities of black, thrash, and even a taste of death the band creates a vicious aural assault that will quench the listener’s thirst for all things metal. Throughout the first year of the group’s existence the songs that would become their debut album were meticulously crafted by members Scott (guitar/vocals), Chris (bass), and David (drums) and eventually were completed with the addition of Kelly (lead guitar) at the beginning of 2014. The tracking began shortly thereafter in Scott’s own Velocity Studios for the album that is now known as Storming Heaven, a bold statement chastising Christ and his blind sheep for their “righteous” ways with the ultimate goal of destroying God’s Kingdom. With live rituals now beginning, the force that is FORNICUS will strengthen to take its place as one of Kentucky’s premier practitioners of metal.

1. We Are Sin
2. Pallium Mali
3. King of Egoists
4. Into Obscurity
5. Thirst for God
6. Antichrist (Sepultura cover)
7. Storming Heaven
8. The Beckoning