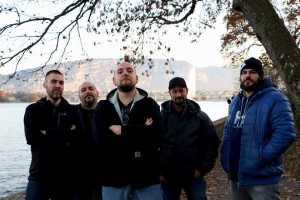 A few weeks after the physical and digital release of its debut album, Swiss stoner/sludgecore/metal outfit COLOSUSS FALL just announced a Limited LP edition of ‘Hidden into details’, coming out on February 27th.

In the meantime, the album is still available for CD on the band’s webstore / Altsphere distribution and digital + full stream on Bandcamp.

The band as it exists today was formed in July 2011 in Geneva by members having previously taken part in various bands of the local metal scene. The project is part of the meeting of David Moro (guitars – formerly of Forge) and Philippe Suarez (guitars- former member of Amok) in 2009. A number of musicians have contributed to the karma of the band. The actual line up is completed by Albert Serrano (bass), Christophe Laureau at the drums (after the departure of Bastien C. Anthony) and Mateo at vocals.

It is not easy to apply COLOSSUS FALL’s rich and expanded sound to any existing style, being both brutal and sophisticated at the same time, but rather it is clearly an influence of a number of quite different genres.

However, COLOSSUS FALL might be listened a kind of mix between KEELHAUL, COALESCE, CONVERGE, ISIS and MASTODON.