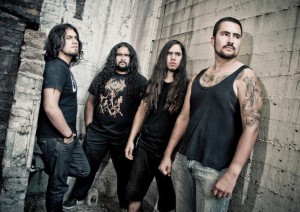 After the releasing of their first full length INVERSE POLARYS the Chileans ENTROSPECT return to the attack with this promotional single and free to download entitled AWAKENING, which it sets the parameter on what it will be their second full length to be recorded this 2015 and that again, it will count with the support on this edition by its discographic house AUSTRALIS RECORDS that will appear in the next months to light.

“Awakening it’s a single that marks a before and after inside of the band” states its leader Luis Caro, ” it has been a while between the composition of our first album and because of the internal changes in ENTROSPECT such as the departure of out drummer Alvaro and the inclusion of Guillermo Pereira, besides the consolidation in a 100% of Sebastian as a new stable front man and now part of the band, is that this new material comes with more aggressive marks without losing the technique that characterize us”

Awakening can be downloaded completely for free in digital format in http://www.australisrecords.com/