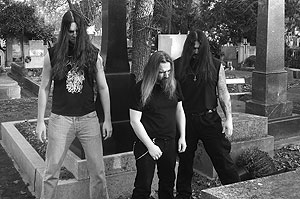 COFFINBORN is a lesson in solid, competent Death Metal. Though the essence is rooted in the old school sound, COFFINBORN’s music is effective enough to garner appreciation of any Death Metal fan. These Hungarians don’t follow trends and that’s the way it should be. Like GRAVECRUSHER, COFFINBORN presents an individual take on this style of music, encompassing influences from the American, Swedish and also Finnish Death Metal scenes to create music that will remind you what’s so good about Death Metal in the first place.

From Hungary comes GRAVECRUSHER, playing Death Metal like the old greats but with renewed vigour. This EP showcases the ravaging music in the band’s own vision, after imbibing lessons from the Swedish Death Metal bands like GRAVE, UNLEASHED and ENTOMBED and also adding a Dimension of Finnish brutality such as early SENTENCED, PURTENANCE and CONVULSE. But this doesn’t fully represent the band’s sound because GRAVECRUSHER presents it with its own style and power, defiant and lasting.