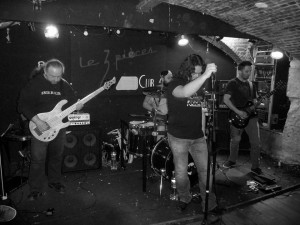 FORSAKEN PEDDLERS was born during the summer of 2010 with the main goal of playing Epic Doom Metal and to pay tribute to those legends that inspire us : CANDLEMASS, SOLSTICE, SOLITUDE AETURNUS and MANOWAR (Ross the Boss era). The band played its first gig in Rouen on march 2012.

The first record, « Songs of Fate and Freedom » was released during Fall 2014. It was recorded, mixed and mastered by Julien Bous of Postghost Recordings during Spring 2014. After this recording, the band decided to have a hiatus, which ended in March 2015, when FORSAKEN PEDDLERS raised again with a different line-up and worked on new songs. This brand new line-up played its first gig in april 2016 with Hell. Later in 2016, Songs of Fate and Freedom will be released in tape version by Heathen Tribes label.