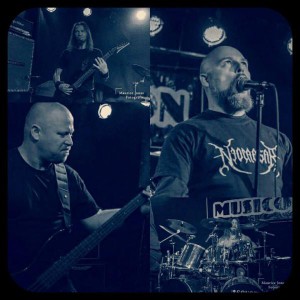 NEOCAESAR is a Dutch Death Metal band, formed in the fall of 2014 by Mike van Mastrigt (vocals) and Bart van Wallenberg (guitars). Being the heart of the band SINISTER in the early nineties, they decided now it was time to continue to write death metal together. After writing 4 songs, the band was completed with Eric de Windt (drums) and Michel Alderlieftsten (bass), both members of Sinister in the nineties as well. This composition of members worked out perfectly and by 2015 a full album was written. The songs can best be described as fast and aggressive old school Death Metal.

In order to get the best sound that would fit NEOCAESAR, as well as avoiding studio time limits and deadlines, they decided to do all the recordings by themselves. While writing and recording the songs, a general public interest for NEOCEASAR started to emerge and demo-recordings were well-received. This resulted in playing several successful shows and festivals in the Netherlands, Germany, Denmark and the Czech Republic.

After completing the full album, NEOCEASAR was really pleased with the result. This is something that the band wants to be out there as soon as possible! In the fall of 2016 it was clear that the best way to go was to present this debut album in their own release, but after some months, a deal was signed with Xtreem Music for a worldwide promotion and distribution, so the album “11:11” will be officially released in December 5th, 2017. If you are familiar with the early Sinister and you like albums as “Hate”, “Diabolical Summoning” and “Aggressive measures”, it is absolutely worth listening to “11:11”.