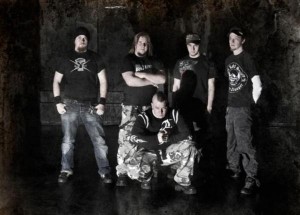 Jyväskylä, Finland -based metal group NEMECIC unleashes a digital single accompanied by a lyric video by Anssi Korhonen with artwork by the band’s drummer Niko Anttila. The song, titled “Smoke Electric”, serves as the first taste from the group’s autumn 2017 debut album, which will be released through Inverse Records.

Founded in Heinola in 2005, Nemecic combines elements of different metal genres in their music. Comparisons have been made to such groups as Lamb of God, Fear Factory and even Alice in Chains. Having entered a hiatus in 2012 and after going through a couple of changes in the lineup, the band finally entered Juho Räihä’s SoundSpiral Audio studio in Kouvola in January 2017.