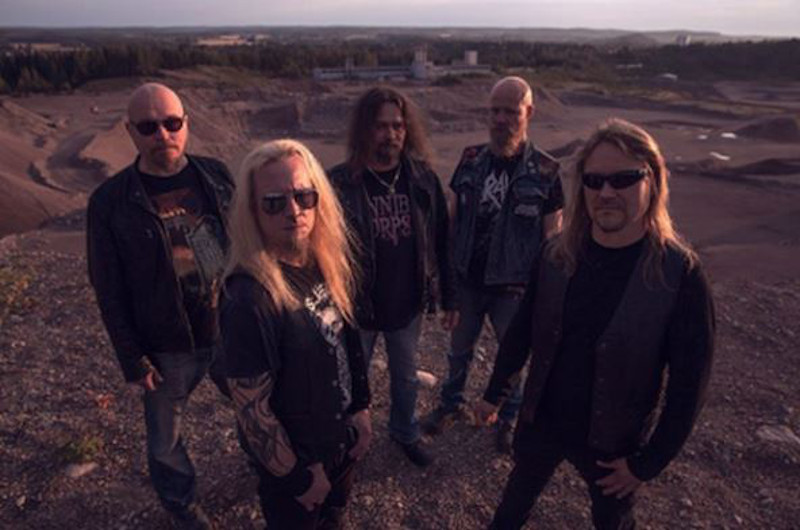 ERA I
In June 1987, a couple of young dudes about in age of eleven ponders on a heavy thought. Janne Kosonen and Ville Raitio decide to form a Thrash Metal band. Inspired by bands like Slayer, Venom, Dark Angel and Death. Name was chosen to be ANXIETY.

First demo “Mental Disturbance” was recorded in 1989 and the name NECROPSY was introduced. At that time, Janne performed the vocal parts as well as played guitar. Aatu Holma on guitars and Jari Louhiniitty on bass.

Vocalist Aku Rytkölä joined the band. “Curse” demo came out and the year was 1990. In the same year demo “Indigestion”, which was darker in tones and more Death Metal instead of past Thrash sounds was released.

“Another World” demo came in 1991 and after that Tero Kosonen replaced Aku Rytkölä. Toni Rahkonen took his place as a bass player. A split-LP with Demigod and 7”EP “Never to be Forgotten” were also released during the year ‘91. After “Go All the Way of Flesh” demo (1992) was Ville Raitio’s turn to give up and leave the band. Taito Soramäki jumped on drummer’s seat. Music style changed radically at that time. “Promo Demo ’93” was more technical Death Metal. Last song “Anointing of the Sick” was recorded for “Monoheads Collection” CD 1993.

In 1994 Aatu Holma left the band and Tommi Tanskanen stepped into sinking ship. Even though first record deal was in hand. Songs and covers were ready. Studio time was settled and paid. Something was changed. Band suffered from lack of motivation. Janne thought that it was better to take a break which stretched to fourteen years…

ERA II
Over the years, Janne (lead guitars) and Tero Kosonen (vocals) talked many times about putting the band together again but it was not easy to find suitable players from hometown Lahti. However, in autumn 2008 NECROPSY was blood and flesh again. Aatu Holma got exhumed to play second guitar, Hannu Väänänen (drums) and Ville Vartiainen (bass) joined as new members. After long hard work of rehearsing and few gigs at Finland, first full-length album “Bloodwork” came out in July 2011 through Tritonus Records.

Aatu Holma left the band in October 2011 due to lack of time and Sami Heinonen joined in. In 2012 NECROPSY got in touch with Xtreem Music with whom they signed a deal for the release of a new mini CD and their 2nd full length album but before that would happen, Century Media offered the band to re-issue all their demos and EP’s on a 3-CD set and 4-LP set.

One of the highlights was Finnish Death Metal Maniacs Fest in September 2015. In May 2017, for the first time, NECROPSY got a chance to play outside of Finland at Maryland Death Fest XV. NECROPSY started to write new material and more like bored on playing just basic Death Metal. It felt like it was time to do things different and slow down the beat and make things simple. New EP “Exitus” is more Doom than previous releases and will be released by Xtreem Music in January 2020.

Hannu Väänänen decided to leave the band by the end of 2019. For the moment, drummer Martti Merilaid performs live shows with NECROPSY, which will also play old stuff from nineties on forthcoming gigs.