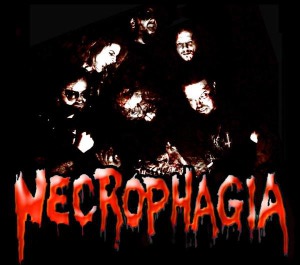 The masters of death metal horror invite you to bang to the Sabbath on a coffin night, when the evil priest and the rat witch raise the dead among us! Once again Killjoy DeSade has taken his time to compose and record ‘WhiteWorm Cathedral’, but the result was well worth the wait. NECROPHAGIA have generally taken another step back to a more straightforward approach. Although their latest full-length ‘Deathtrip 69’ (2011) was generally met with roaring applause, there has been some criticism levelled at the album. Killjoy DeSade seems to have drawn the sameconclusions and reduced the atmospheric samples to the necessary, while focusing on songwriting and catchiness.

Now NECROPHAGIA deliver more old school death metal with a blasphemous groove and killing hooks. The band was formed in late 1983 by the Godfather of Gore Metal, Killjoy and their debut recording ‘Season of the Dead’ was unleashed in February 1987. In the same year the Americans split despite their tremendous impact in the underground death metal scene, which they helped founding. In the middle of the 1990’s horror fan Philip Anselmo (DOWN, ex-PANTERA) convinced Killjoy to resurrect NECROPHAGIA and joined for the next three releases including their second album ‘Holocausto de la Morte’ (1998).