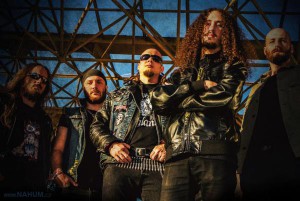 Beginnings (2004-2005)
The band was founded in 2004 by Tomash Nahum and Pavel Balcar. After a few rehearsals, the band started performing and the first concert was a success already. The band continued playing and recorded the Unhuman demo in their studio for their own needs.

Period of forced sleep (2006-2009)
After a promising beginning, the band goes to sleep. Two members of the basic squad go abroad for a longer period, and the drummer and bass player are leaving for good.

Debut album era (2010-2015)
When a new drummer is selected after a long process, the band consisting of Tomash Nahum (g), Pavel Balcar (v), Jan Balcar (bg), Michal Blaha (d) and Roman Ševčík (g) goes steady and starts making new things. The first year is all about concerts and preparation for debut album. The album is recorded between 2011 and 2012 in the Mroš studio and it is called The Gates Are Open. The band issues and distributes it in 2012 at its own expense. The band, provisionally focused on home scene, massively supports the album with reviews, concerts and interviews only in the Czech Republic and Slovakia. The album was supported with 70 concerts. 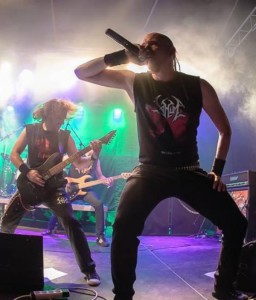 The band has been working on its second album since 2014. In the beginning of 2015, it goes to the studio with new material, however, since the band is very busy asking a lot from every member makes the band changes before the new album is out. Drummer Michal and guitar player Roman leave the band. But the band finds new musicians quickly. They have new talent, Michal Kapec playing the guitar and Tom Brighter, experienced member of Revenge Division from Slovakia starts on the drums. Renewed, the band goes to the GM studio in 2015 to record the new feeling of the band enriched with young blood. On 1st November 2015, the album which was impatiently awaited by the fans makes it out finally. It is here to help the band conquer new territories. The album is issued by young and agile label of some members of the MuSick Attack Production band making a global promotion of the album.

THE CONCEPT OF THE NEW ALBUM
Thematically, the album is linked to the “The Gates Are Open” album and shifts its apocalyptical topic even further. While the debut only had a vision of apocalypse and felt it approach hearing the message that nothing stands in its way (the gates are open), the new album is contemplating its triggering. What was about to come in the first album is now happening. In real time, we can see increasing chaos in the state, on the streets, and even in the heads of people regularly lubricated by the media. The raging chaos is a tool, side effect and also the essence of apocalypse that has just started and that will be the last thing humanity will experience. We have just entered the last era!

The essence of this chaos is depicted on the album cover. Its aggressive colours and central figure at the border of abstraction embody chaos that was created in the city, the symbol of humanity. It grows from it and destroys it; its roots are getting strength from a pile of dead. The encircling runners of chaos are absorbing the viewer and making him part of this scene. This chaos has no identity, face of a man or anything specific. It does not win, it only destroys everything. It disintegrates and at the same time grows and attacks everything as mould, as fire. Wide-eyed, affected eye on the sky symbolizes aw over the nature of destruction.

The cover was created by Daniela “Dahlien” Neuman. Her work, through traditional drawing and unusual stylization, refers also to the musical concept of the album. This concept, even though based on classical tradition of old school thrash metal, death metal and black melancholy, is also an unusual combination of those three. The album is based on strong motives, apocalyptic atmosphere and also much more on metal aggression. The last days have begun!