MOSFET. Proper thrash ‘n’ roll with death metallic heaviness from Austria, Upper Austria. Founded in 2003 the quintet beats heavy death metal, rifftastic thrash and a no-nonsense rock ‘n’ roll attitude into headbangable form. Mosfet boast numerous live experiences, musical accolades and two full-length LPs along with an EP in their roster. In 2015 the band will release a new album via office4music, the best distillation of their hard-hitting sonic brew yet.

Mosfet. That’s proper thrash ‘n’ roll with death metallic heaviness from Austria. Founded in 2003 and active with the current five-members-constellation since 2008. Loud, hard and annihilating stages with the utmost quality. Heavy death metal, rifftastic thrash and above all a rock ‘n’ roll attitude written in sweat. Be it frontman Philipp Essl’s badass voice and stage presence, the interplay between the freight train riffs, chainsaw motifs and lightning-fast solos of guitarists Alex Kleiß and Marc Gruber, bassist Patrick Schmuck’s infectious low-end work or the eardrum massacre committed by drummer Flo Dobretsberger, the team from Austria knows how to seamlessly fit every single note into their homebrewed crowd destroyer. After a self-recorded and produced EP (“King of Damnation”, 2006), extensive live experiences (Metalcamp 2008/09, a.o.) the band reached the finals of the 2009 International Live Award and signed with the Austrian metal label Refused Records in the same year. Already in 2010 a first full-length “Sickness of Memory” was let loose on the world. On this aural energy package the band found its own style and started preaching its neckbreaking gospel at numerous gigs and festivals, e.g. Wacken Metal Battle (2009), Metalfest Austria (2010) or Hell Over Vellach (2011). After releasing their second longplayer “Deathlike Thrash’n’Roll” in 2012, Mosfet have now recorded their third full-length Album, which will be released via office4music in 2015 under the unambiguous title “Screwing The Devil” and carves the band’s own sound onto CD in its strongest and most devastating form yet. 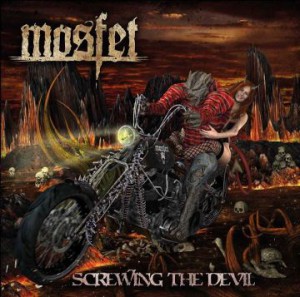 In autumn 2015 Mosfet will declare ears and neck vertebrae fair game again. Trenchant as usual the foundation of merciless, hybridized death/thrash crushes everything in its path with the weight of a death metal band and the racing intensity of classic thrash acts. Combine that with unrefined no-nonsense rock ‘n’ roll and the necessary groove and you’ve got yourself the familiar Mosfet recipe. An energetic, tightly recorded and produced monster, for traditional metalheads or occasional bangers alike.

The successor to the 2012 metal bulldozer “Deathlike Thrash‘n’Roll” weaves the band’s stylistic thread to its logical conclusion. The album is Mosfets strongest and most professional output yet, without sacrificing their style and authenticity. Trenchant as usual the foundation of merciless, hybridized death/thrash crushes everything in its path with the weight of a death metal band and the racing intensity of classic thrash acts. Combine that metal stew with a healthy dose of unrefined rock ‘n’ roll sweat and attitude and you’ve got the familiar Mosfet recipe. Raw and straightforward without being amateurish and flat. Meaty grooves, facelift solos, razorsharp riffs and midtempo bangers are realized with equal ease and force. “Deathlike Thrash ‘n’ Roll” shows the collected experience of the band: The disc is written with accumulated self-confidence with the recording and production each being watertight and professional. An energetic monster, for traditional metalheads or occasional bangers alike. One thing is for sure: In autumn 2015 ears and neck vertebrae will become fair game again.