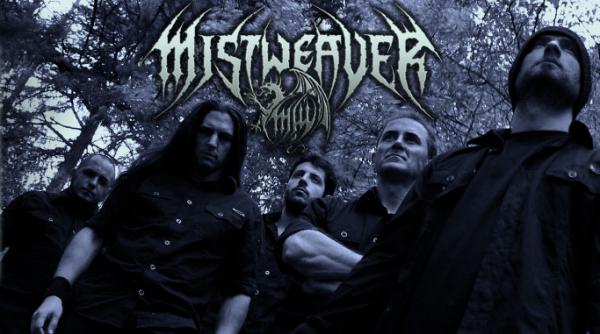 Regards from Czech republic. Please, present yourself and your band for the our readers. How was the band formed? What was the ambitions of the band when you started?
Greetings from Burgos, Spain. MISTWEAVER was formed in 1997 by Raul Weaver, guitar, singer-songwriter and only original member. The idea was to make a band that suited his musical taste, as at that time there was no other project of this style in the city. He started recruiting members, switching at first, to get a formation that had the same interests and musical ideas. He had no other intention but to do what one likes but seriously. And so it has remained until today, with the logical line up changes and moments of greater or lesser activity. But in the end we are here, with five albums and one EP, many concerts offered and what is yet to come.

Tell about the sources of your inspiration in music from the very beginning until now. Are there some differences?
The idea was to make an extreme metal band with the influences we liked then and that we still like, classic heavy metal and thrash metal like IRON MAIDEN, ACCEPT or SLAYER and more extreme bands like IN FLAMES, ARCH ENEMY, AMORPHIS, MOONSPELL, SAMAEL, EMPEROR, DISSECTION, CARCASS, ENTOMBED, DISMEMBER … The inspirations currently remain the same. We all love those groups mentioned, that somehow mix power with melody, but obviously it can be noticed an evolution in our sound. Initially more doom elements, then more heavy parts, up until now in which our sound has hardened further, recovering a little the spirit of the aforementioned bands. 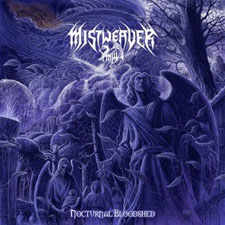 Please, can you introduce your last CD “Nocturnal Bloodshed“? Is it conceptual album?
“Nocturnal Bloodshed” is our latest album and as we said, the most extreme one, but without losing all those melodic passages characteristic of all our works. It’s not a concept album, that is, it does not have a particular story through the different tracks or follow these in a preset order, as we did it in our album “Age of Darkness“. However, it is true that all the lyric refer to the arrival of the Antichrist and the Apocalypse.

What is the role of blasphemy symbols in your music, lyrics and artworks? What is your point of view about religion and church?
At first the lyrics were more varied and dealt with various issues like medieval or viking stories, horror movies … But in this last album and already at some extent in previous ones, the themes are much more extreme and dark so the lyrics acquire that darkness and become more evil and blasphemous. These are the lyrics that best fit our music and we also find it very attractive to see them reflected from a visual point of view. Therefore, we relied on Juanjo Castellano (UNLEASHED, VOMITORY, AVULSED, NOMINON) for a dark cover on the wave of the 90s bands that we cited earlier. As a band you could say that we are anti-Christian / Catholic, just read lyrics as Deciever’s fall or God is dead, but we neither intend to convince anyone or teach anything. If you like or identify with it great and if not, go to hell. Jejeje. 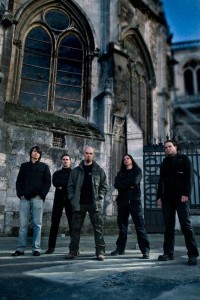 Do you think that Spain is a religious nation?
Well, obviously the Catholic legacy is still present in our customs and way of life, as in other Mediterranean countries, but of course has nothing to do today‘s Spain with the Spain of 30 years ago(or 50, of course). In some aspects progress has been made. But the church still has great power, economically, socially, legally and politically, so secularist movements still have great difficulties to show and achieve their goals. But at least for now, they have not put us in jail for worshiping the devil or have banned a song in Spain, which by the way happened in the US with the theme He Who Takes your soul. This song does not appear in the American edition of our album “The Aftermath”, which coincidentally has probably become the most popular song of the band or the one most demanded at concerts anyway.

Your music is full of melodic and beautiful elements, but basic skelet is really extreme and hard. Do you agree? Can you describe the role of keyboards in your music?
Yes. Our music has always mixed power and melody, but now the base is much more extreme. The keyboards have always been an important part of the MISTWEAVER sound. However, in the beginning maybe it had an excessive starring role repeating the same riff as guitars at an excessive volume. We believe that in “Nocturnal Bloodshed“ we have found the balance so that the keyboard disappears or is in second place in the most brutal riffs and appears to give a much darker, epic and melodic touch when the music calls for it. In fact, it has been our keyboard player, who wanted it that way himself. He removed the keyboard parts in pre-production so that they didn’t spoil the riffs or asked that volumes was turned lower at times in the mixing phase. In previous albums there has been some criticism of the excessive role of keyboards and yet in “Nocturnal Bloodshed” there are unanimous opinions in emphasizing its role and melodic and dark contribution.

What is the extreme metal scene like in Spain? Are there many bands that play in these styles that deserve some broader attention?
In Spain there has always been extreme metal bands. Maybe not to the level of other European countries but certainly many more than are known. Unlike in other countries, like yours, musical culture is non-existant (not only in relation to metal), and only radioformulas or shity pop music exist (we do not mean to say that the whole pop is shit, but what is listened to in Spain is). Therefore, Spanish metal bands are not well known, but there are many and high quality ones in the various styles of extreme metal, search in metal archives for instance and you‘ll find many. Raul has two other extreme metal projects more: MASS BURIAL (Death Metal Stockholm sound) and GRAVEYARD OF SOULS (Death / Doom).

How important is self realization for you? Is it important part of your life?
In a way, yes, and the music is a good way to feel fulfilled, though not the only one. But it is true that when you look (or listen to) your work, you feel satisfaction. Though, always with a critical eye for improvement.

How do you view the response to your music outside Spain?
I would say better than in our own country. At least most of the people who write us or care about our music, as you, are usually foreign. In Spain, especially lately, we do not seem to exist, with certain exceptions. But this is the way things are, so we continue with our work to at least feel fulfilled, as we said before.

How do you balance personal/professional lives in the band? What is it like to be a metal musician in Spain?
Extreme Metal and professionalism in Spain are contradictory words, in the sense of living only through music, which is impossible, so we all have our jobs besides from the music. But if you want to be a serious musician in Spain and worldwide, regardless of the response you get, you have to spend many hours of study, testing, concerts, etc… so it is true that it is difficult and expensive to combine work to live, family and music, and so the only benefit is to enjoy what you do, which is most important. 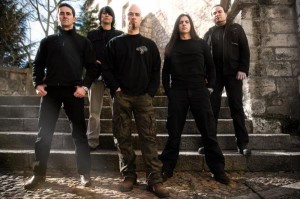 Which bands do you listen these days?
We always hear the classics and the bands we mentioned earlier, but lately GRAVE, MOONSPELL, GHOST, OMNIUM GATHERUM, BLOODBATH, MORS PRINCIPIUM EST, KRONOS, GOJIRA, KALMAH, PARADISE LOST, CARACH ANGREN, CATTLE DECAPITATION, INSOMNIUM, MGLA, THE COUNTY MEDICAL EXAMINERS are common ones in our players.

What are the future plans for MISTWEAVER?
Well, we‘ll keep presenting “Nocturnal Bloodshed“ wherever possible. In the future we want to edit new tracks that have already been recorded and that we have sent to Dan Swanö to mix and master, and in general we’ll continue enjoying the music and trying to get to as many places as we can.

Thank you very much! Is there anything else you’d like to add?
Thank you for your interest and for this interview and hopefully we’ll be on stage in the Czech Republic sometime. Greetings to all!!! And of course, visit our site www.mistweaver.es and get in contact with us if you wanna get our stuff at solobscurabitur@hotmail.com