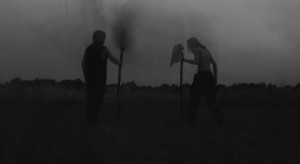 Polish avant-garde black metallers Misanthropic Rage have announced the release of their upcoming full-length album, Gates No Longer Shut. The new material will be released through Godz ov War Productions in November 2016 and follows the dark experimental path which was paved by the recently spawned EP, Qualia.

The band comments: “Gates No Longer Shut” contains 7 diverse tracks, based on Black Metal we took it much further, exploring the sound created by every day inspirations. It is also literally the Gates that we opened before us, the Gates that drive us away from all boundaries, opening to our own world, both musically and philosophically. It is our entrance through which we gladly step tall and proud.”

Get a taste of Gates No Longer Shut by listening to a brand new track via Soundcloud: https://soundcloud.com/godzovwar/misanthropic-rage-into-the-crypt