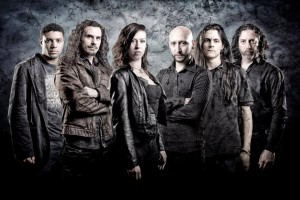 MindAheaD were born in 2010 at the behest of the guitarist Nicola D’Alessio (previously Athena and Hellrage). First, the guitarist Matthieu Angbeletchy joins the project, then the vocal section composed by the aggressive voice of Francesco Novelli and the sweet voice of Kyo Calati, in the end, at the beginning of 2013, with the arrive of the bass guitarist Matteo Prandini and the drummer Matteo Ferrigno.

With this lineup, MindAheaD define songs that will compose their first studio album, after they begin proposing their music on live stage, proving a good response from the audience. In 2016 Matthieu leaves the band for personal reasons and he is replaced by Guido Scibetta. The idea is to merge different aspects, sometimes opposite ones, of the human feeling, gathering them in a variegated personal music proposal, that plunge its roots in musical influences that go from seventies progressive rock to the death metal.

The name itself suggests the exemplary and polyhedric nature of the band, with a wordplay between MIND (thought) and HEAD (anatomic part), mind projected forward against irrational madness (M.A.D bold in the logo).