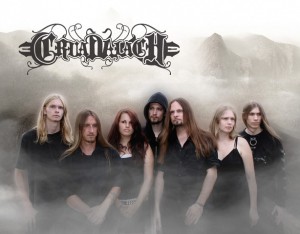 Among the younger Czech metal bands, the eight-member strong Prague-based tribe CRUADALACH easily stands as one of the best export articles. This folkmetal act, armed with a whole range of instruments, including two violins, a plethora of woodwind, mostly medieval, instruments and of course a strong metal section, walks its own path on an album, which is above all else a personal proclamation of the tribesmen. A proclamation underscored by music that respects no genre boundaries. During the five years of its existence, the band has appeared on around 120 shows, those being often bigger festivals, which took place not only in the Czech Republic, but also in Germany, Poland, the Balkans and many other countries, whereby CRUADALACH has shared the stage with almost every elite act within this genre, from ELUVEITIE to PRIMORDIAL.

“Rebel Against Me” is the second full-length album in band’s discography, containing 11 tracks, including a bonus orchestral composition, and featuring a myriad of guest musicians, such as the three singing Valkyries from the acclaimed Polish act PERCIVAL SCHUTTENBACH, or the professionals from the Czech national symphonic orchestra and the Czech Philharmonic. “Rebel Against Me” is an album proudly dedicated to all who stood for what they believed in, even though in doing so, they often risked their livelihoods and often even their lives themselves. This second CRUADALACH album will furthermore be supported by a music video of the song “Life-Worshipping Bastards” which will premier, along with the album itself, during the release party in January in Prague-based Jamm Club, where CRUADALACH shall also play their special unplugged set, as well as by a unique “fan” music video of the song “Zlatovláska” that is a gift to all fans who supported the band during its crowdfunding campaign that made this album a reality

The “Rebel Against Me” album shall be released by MetalGate Records in January 2015 in a jewel slipcase format, as well as digitally.