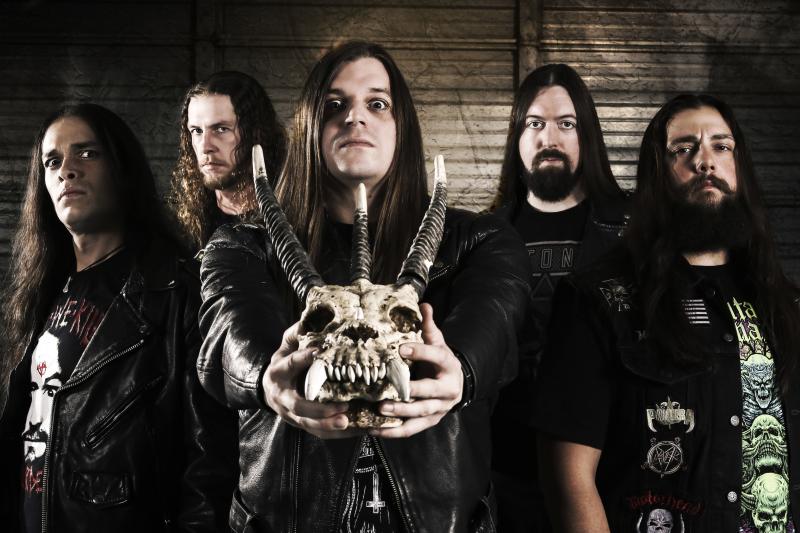 Today, the Southern California melodic death metal quintet VOICES OF RUIN proudly unveils ‘I Am God’, the first taste of their forthcoming third album (and M-Theory Audio debut) “Path To Immortality.” A lyric video for the track, designed by Rafael Ortega of Ecliptic Visions (The Absence, Helsott), can be seen at this location: https://youtu.be/DOEPyH3WxA4

“I Am God” can now be streamed on Spotify, Apple Music and other digital platforms. In addition, the song is downloadable instantly with all digital pre-orders of “Path To Immortality.” Physical pre-orders for the album – which was produced by Machine Head guitarist Logan Mader (Gojira, Septicflesh) and includes a cover of the Foo Fighters’ “Everlong” – are available on compact disc and limited-edition splatter vinyl via Bandcamp (https://voicesofruin.bandcamp.com/album/path-to-immortality) and the M-Theory Audio webshop (www.m-theoryaudio.com/store). The cover artwork by Par Olofsson (Exodus, Immortal, Revocation) is pictured below.

Says vocalist Dave Barrett, “We are stoked to release ‘I Am God’ as the first look into our upcoming album. This song’s an absolute ripper with shreddy guitars and aggressive verse. The lyrical content tells the story of a demon taking control of this universe and beyond, which is brilliantly captured by Par’s artwork. Rafael did an amazing job piecing together this lyric video to flow with the song – kudos!”

Adds guitarist Tom Barrett, “It was difficult to choose a single because all of the songs turned out killer, but we felt that ‘I Am God’ was a good place to start. It tips the hat to classic melodic death metal while also incorporating thrash elements and a crushing production, and it’s a furious track that represents the intensity of the album. We think it’s by far our strongest material to date, and we can’t wait to unleash it in April!”

VOICES OF RUIN – who describe their sound as an epically-crafted blend of classic heavy metal and modern death metal that also pays homage to the traditional Scandinavian melodic death metal sound – have performed extensively in support of their two self-released albums, 2010’s “Into Oblivion” and 2015’s “Born From The Dark.” In addition to winning the U.S. Wacken Metal Battle in 2018 – when they bested dozens of unsigned groups to earn the chance to perform at the world’s largest annual heavy metal festival – the group has toured Europe with Internal Bleeding and Sacrificial Slaughter; supported Vader across North America on the 2017 “Strike Of The Empire” tour; played in Japan alongside Vader and Hate; and performed extensively in Southern California alongside a number of notable acts, including MORBID ANGEL, TRIVIUM, DEVILDRIVER, DARK TRANQUILLITY, AMORPHIS, CATTLE DECAPITATION, DYING FETUS and ORIGIN.

For the past six years, VOICES OF RUIN have also organized the annual Ruinfest festival, a celebration of California’s extreme metal scene that has featured the likes of FALLUJAH, EXMORTUS, PESSIMIST, SKELETAL REMAINS, HELSOTT and LETUM ASCENSUS. The band will return to the stage in their native Orange County alongside INSOMNIUM and OMNIUM GATHERUM in Santa Ana, California on April 3.