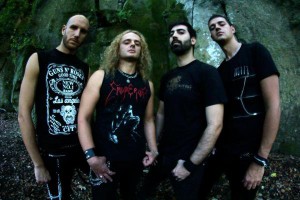 LYKAION is an Italian Dark metal band whose style links to the interrupted project of ’90s gothic metal bands, re-reading it in a unique way, including influences from new hard rock/sleaze Swedish sounds and the romantic/decadent vision of bands like Him, To Die For and Katatonia. “Heavy Lullabies” is the band’s second album, and it represents a firm step forward compared to the debut album “Nothin’ but death”.

The result is a perfect balance between scratching sounds and straightforward melodies who will easily stick in your head after just one listening, in a perfect range from ballads to heavier songs. The band promoted their music with prestigious live acts, opening for DEEP PURPLE, KREATOR, MOONSPELL, BEHEMOTH, DRAGONFORCE, HUNTRESS, KISSIN DYNAMITE and many more.