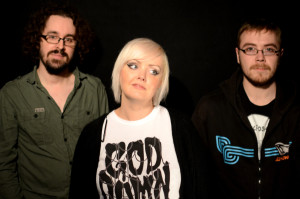 Speaking about the album and the recording process, the band say: “We spent the first year and a half of the band’s existence locked away in the studio releasing a bunch of EPs, with our ‘write it in a night, record it in a weekend’ regime.

“As we were starting to prepare our live show our friend persuaded us (after a lot of arguments) to put out a full-length album. He got the timing about right because after we’d put in the hours really understanding what our sound is, Wait For The Echois the truest representation of what we’re about: keeping it heavy and fuzzy, but working in that melody with it.”

LongFallBoots is not a band that was meant to happen. The band was formed by accident by friends Alex Caithness (KOSS, Cincinnati Bow Tie) and Ben Holdstock (Paralus, Cincinnati Bow Tie) when their other bandmates failed to turn up for rehearsal. Two and a half hours later and their first EP “It Was Duke” was written.

Hailing from the middle bit of the UK, LongFallBoots make a heavy and groovy noise, written and recorded under ridiculous self-imposed restrictions resulting in spontaneous, fuzz-filled eruptions leading to a string of EPs written in a single night and recorded in a weekend. Their frenetic work ethic lead to the release of 6 EPs in the space of 12 months during 2012 and 2013 before bunkering down to write and record their first full-length “Wait For The Echo”.