Regards from Czech republic! Can you introduce of new band (or project?)… LIFESTREAM? It’s very easy name for band, but… it’s interesting name, really… 🙂
LIFESTREAM is a french black metal project started in 2012, by different members of the underground scene of Bordeaux. Our first album “Post Ecstatic Experience” has been released in april 2015 on Emanations, a division of Les Acteurs de L’Ombre Productions, a french black/avant garde label.

Regarding our band name, we wanted a powerful one, mystic and mysterious, which stands out from traditional names in the black metal circle. LIFESTREAM can refer to many things, as an invisible force which makes livening things up, which links everything around us, or as existence itself, death and chance being parts of it. Its meaning can be understood in different ways. Finally, it’s a name that describes us pretty well.

“Post Ecstatic Experience” is first (MC) album. Can you tell me about the creation of the album and the overall concept? How important is tape like a music format? Do you prefere vinyl too?
The concept of our album is the correlation between rapture and collapse. You can find this concept in a lot of very different situations in life, this is what interested us. About the creation, guitar riffs are more or less always the base of songs. Then, everyone works around it, tries different ideas. It is rare for us to have a precise idea of a final song before its creation. However, the album has an intentional unity. Nowadays, music is tending towards dematerialized format. Everybody can easily find and listen a band he likes on the internet. Nevertheless, in metal music, people mostly support the bands they like, and they seem to keep buying physical format, the one they prefer. The tape is certainly the most underground format. We are not especially pro-tape, but it has been a great opportunity for us to promote our album, so we took that chance. Vinyl is a format which came back into fashion those last years, and generally the music lovers prefer it. Maybe we’re going to release our album in such format later. In the meantime, a CD digipack is planned for September ! 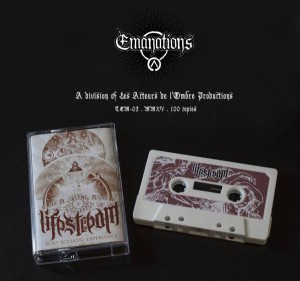 Sound of your record is about old school. I feel that atmosphere of old underground emotions is your intention. Is it true? Are you satisfied with the result?
Our inspiration comes from many sources, especially from Scandinavian black metal, recent or from the 90’s. Though we are also inspired by other types of music. Musicians belonging to SBM scene succeeded in creating something really impressive that commands respect. You can definitely go through many emotions, positive or negative; this music comes from heart and soul. It was truly inspirational for us and we wanted to do the same; try offering how we feel about BM and more generally about what surrounds us.

How important are lyrics in your music?
Lyrics are pretty important, they illustrate this bipolar concept described above. Each song deals with its own approach of it. For example we broach this idea through themes as loneliness, mourning, naive faith etc…

Please, can you tell me something about album cover? All artwork is amazing…
The tape cover was made by our drummer, and the complete artwork by Rom from the label LADLO. There is a second artwork version for the CD format, which comes from an old italian engraving. Both embody the real duality found in our album and this is why it is particularly appropriated to use them. 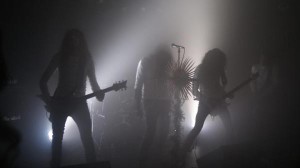 How would you describe the French black metal scene?What do you think about the French black metal scene? Do you commend any new bands of French underground?
We’ve never really looked deeper in this scene, even if it’s a real prolific style in our country and there are some bands that we really respect. Very few French bands are a part of our influences. This is not what mostly inspires us. Indeed, I don’t think LIFESTREAM offers a black metal “à la française”. Among the current active bands, we can even though recommend you OTARGOS, AOSOTH, GLACIATION, or 6:33 if you like very diversified influences.

For example… What does underground metal scene mean to you? Do you perceive any differences between underground subculture and mainstream?
“Undergound” seems overrated and lacks of meaning since nowadays, music can easily be obtained and shared, except for personal music you keep away from the Internet. But if we have to explain why black metal is considered underground, it is probably because it is not a music widely spread out, few people actually listen to this type of music. Current broadcasted music is often aseptic. This is not true for BM, the approach is more personal, musicians try to create something they really like, that doesn’t sound like something already existing, where expectations from the audience or earning money are not the top priorities. 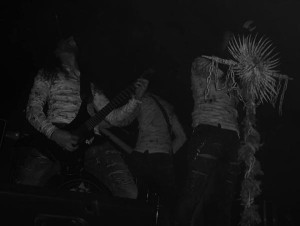 How do the people in France react on metal music? How important is religion for society in France?
The number of metalheads keeps increasing over the years, and metal festivals like Hellfest surely play a key role on this trend. Metal music obviously finds a great audience in France. Even if it is not one of the most popular types of music, there is no real “rejection” from French people, and it is more and more tolerated. Some religious people don’t accept it and try to make events like the Hellfest cancelled every year; but these are very minor facts and never lead to serious issues. One of the main explanations is probably the role of the religion in France, which kept decreasing over the years. Nowadays, different religions coexist, of course, however with less impact than before and with few adepts. The main part of the population is atheist. Secularism is claimed in France, new generations are not involved in religious acts. Religion or not, tolerance must be the key value.

Special question! What is the best black metal record of all time?
This question is very subjective and it is rather complicated to answer it. Many good bands contributed to black metal music, releasing classics. There is a real evolution regarding personal tastes, and it can also be dependent on how you feel, your mood. One true reference and inspiration is probably “Consolamentum” from the German band ASCENSION, which was a real motivation to create LIFESTREAM. This album is incredible, possessed, haunted but still illuminated, bringing occult and spirituality to their culmination, while the music but also the imagery and the theme obviously form one unique entity.

What albums lately made on you the greatest impression?
In recent releases, we can mention „In Times“ from ENSLAVED, „Deadly Scenes“ from 6:33, „With Hearts Toward None“ from MGLA, „Esoteric Warfare“ from MAYHEM, „A Gaze Into The Abyss“ from ANTLERS, „Epistemology“ from KEEP OF KALESSIN or „A Umbra Omega“ from DHG, geniuses of avant-garde black metal in terms of composition and originality since 1999.

What are your plans for the upcoming Summer season and what kind of plans you have for the future? Are there any further live activities planned?
We are going to spend the summer looking for shows in France which will help promoting our CD album‘s release in September. Nothing definite yet, but no tour is planned for this year.

Thank you very much for the interview. Is there anything else you would like to say?
Thank you for being so much interested in our project, and thanks to all the people who support us ! Keep the grey flame alive!