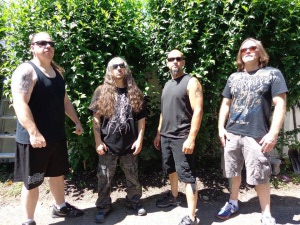 Czech metal label Lavadome Productions is proud announce the June 6 release of The Gates of Hell from beastly NYDM trio DAY OF DOOM. Dwelling in the underground of Long Island,DAY OF DOOM’s third album is the first to be released on a label. The new material represents the raw, sickening, and undeniable brutality of early New York Death Metal, sending the listener back to a time when every new album sounded fresh and exciting; the sole aim to create music that delivered a punch to the face and a kick in the gut. That’s the sound of The Gates Of Hell, a stab of bludgeoning, uncompromising force played with skill and passion. The cover art was conceived by the mighty Raul Gonzales.

Track List:
1. The Gates of Hell
2. Fathers Lies
3. Embrace your Demise
4. Slaughter of the Lamb
5. An Evil Demoncy (The Last Days of Doom)
6. Circle of Eternal Aftermath
7. The Vomitorium Angel
8. Feasting on the Flesh of the Godly Ones
9. Reborn Through Oblivion Flames
10. Through Horrible Despair
11. Remnants in the Cavern of Displeasure