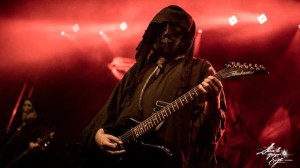 Burn Out The Remains trilogy is the final chapter about the Great Pandemics that struck the humankind. This time the story begins a few centuries before the famous Black Death plague.
The song Panoukla DXLII (Pestilence 542) tells the story about the first documented plague pandemic that took place during the reign of Byzantine emperor Justinian I and therefore was called the Justinian Plague.

The song Crom Conaill (Irish name of the illness) tells the story of this disease spreading further through the civilized realms of the time and the suffering this infection was causing to the human world for two centuries. Justinian Plague by different accounts had a death toll of 100 mln people in the East. 40% of Constantinople died from the disease. In Europe the estimated number of victims is 25 million people.

Fast forward many centuries into the future – the year is 1918. The world hasn’t yet recovered from the consequences of the bloodiest and cruelest war of the time – The Great War. What followed it was no less horrific. The Spanish Influenza (1918 Flu pandemic) became the most massive flu pandemic in human history, both in the number of infected and dead. About 29.5% of the world’s population (550 mln. People) was infected in 18 months of 1918-1919. By different accounts the death toll of the Spanish flu exceeded the death toll of the Great War and became one of the largest natural disasters in human history…