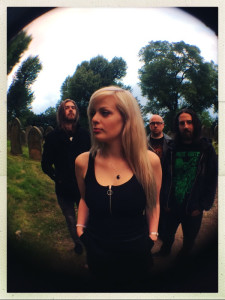 Birmingham doom quartet, KROH, have confirmed details of their upcoming album, Altars, which will be released via Devizes Records in September.

Birmingham has a lot to answer for: the heaving, riff-laden home of heavy metal has thrown up some classics over the years, and been a fertile breeding ground for those with a penchant for the doomier end of the musical spectrum.

One of the city’s latest offerings is KROH. After a faltering start which produced one album and two split EPs, the band split before coming back with a new line up and a fresh take on old material. KROH is the brainchild of Paul Kenney, a former member of Mistress, and founder of Fukpig. He reunited with his former Mistress band mate, Darren Donovan (also ex-Sally and current Burden of the Noose bassist), then recruited Rich Stanton (also of Burden of the Noose) and Olivia Sobieszek to complete the line up.

The rejuvenated ensemble has been finding their feet, both in the studio and on stage. Their latest offering, Altars, is their first full length album with this line up. Earlier versions of Precious Bones and Living Water have been completely re-recorded for the album.

Kenney took the lead when it came to recording, mixing and mastering; the album was created over several sessions between October 2015 and May 2016. The idea for KROH may have been brewing for several years, but now Kenney has established a solid line up, the reality is starting to match up to his vision. Altars is just the start.